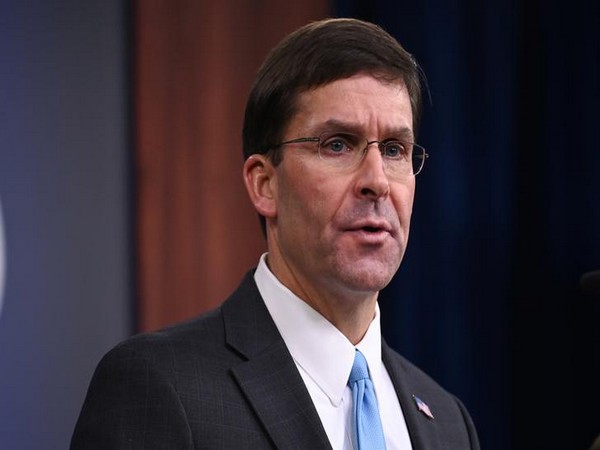 Washington [US], Jan 08 (ANI): US Defense Secretary Mark Esper on Tuesday (local times) said that Afghan President Ashraf Ghani and Pakistani Army Chief Qamar Javed Bajwa offered him sound advice during a phone call on the escalation of tensions in the middle eastern region.
"The United States does not seek conflict but will respond forcefully if necessary. Afghan President and Pakistani General Bajwa both offered sound counsel and advice in calls today," Esper tweeted.
Trump administration has dialled up various leaders in the world to defend United States' fatal strike that claimed the life of Iranian Quds Force chief Qaseem Soleimani. The attack has further downgraded US relations with Tehran.
Iran has vowed to take revenge for the killing of the most revered military personnel in Iran. The strike has been deplored by several countries including Iraq, Russia and China.
"I always appreciate speaking with our partners and allies in the region. We all seek the de-escalation of tensions with Iran," he added.
Meanwhile, Ghani took to Twitter to inform about the phone call between Esper and him, adding that he and Esper agreed that its time for an urgent de-escalation between Washington and Tehran.
"I spoke with Secretary Esper this evening about the latest security developments in the region. We both agreed that it's time for urgent #de-escalation between the United States and the Islamic Republic of Iran," Ghani tweeted.
The tensions between the two nations have persisted since 2018 when Trump unilaterally announced that the US is not a part of 2015 nuclear deal which was brokered by his predecessor Barack Obama.
Following the withdrawal from the deal, the United States has imposed a number of sanctions against Iran to force the country to renegotiate the deal. The sanctions have crippled the Iranian economy, however, the country refused to bog down to US pressure and started to do away with the terms of the deal. (ANI)

Australia to kill thousands of camels amid wildfires

11 killed in landslides in western Nepal

Your dog may have hidden colours due to gene variants,...

They often hang out with Stormi, says source after Kylie...

UP: 7 PPS officers given compulsory retirement for not...