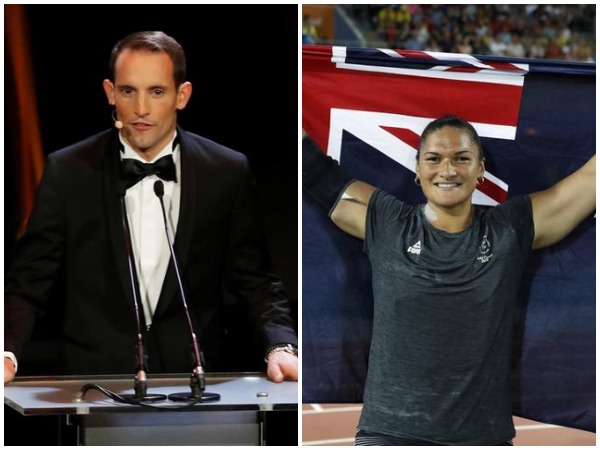 Quai Antoine [Monaco], Nov 21 (ANI): World pole vault record-holder Renaud Lavillenie and four-time world shot put champion Valerie Adams will make a different type of history on Friday when they become the first active athletes to join the World Athletics Council as full voting members, following the governance reforms introduced in 2016.
The newly elected Athletes' Commission on Wednesday selected Lavillenie as the new chairperson and Adams as the deputy chairperson, and they will become the two athlete representatives on the Council for the next four years.
"It is very important to have athletes on the Council because we see that our sport is evolving and we need to keep the athletes at the centre of the discussion," Lavillenie said in an official statement.
"I am very happy to lead a good group of strong athletes who are thinking about the future. We need to be part of the decision-making process, not just the subject of the process. I am excited to have this new mission and to have these athletes with me," she added.
Adams, who is serving her second term on the Athletes' Commission, said she completely supported Lavillenie as chair and was delighted to see two athletes included in the Council.
"It is important to have those two votes in the Council because without athletes there is no athletics. We are just the mouthpiece for the athletes around the world, but it's important for us to have that voice," she said.
Former chair Inaki Gomez, who has served as a non-voting member of the Council for the past two years, was not eligible to continue in that role due to a rule requiring each Council member to be from a different country.
Lavillenie, 33 from France and Adams, 35, from New Zealand led the ballot when six new members were elected to the Athletes' Commission during the World Championships in Doha in September-October. Nearly two-thirds of the 1833 athletes present in Doha cast votes.
Distance runner Bernard Lagat (USA), 400m runner Kevin Borlee (Belgium), pole vaulter Katerina Stefanidi (Greece) and middle-distance runner Aisha Praught-Leer (Jamaica) were also elected and attended their first Athletes' Commission meeting in Monaco.
They joined six serving members with two years left on their terms - Gomez (Canada), Kim Collins (Saint Kitts and Nevis), Adam Kszczot (Polland), Thomas Rohler (Germany), Ivana Spanovic (Serbia) and Benita Willis (Australia).
Six further members were recently appointed to the Commission by the Council - Majd Eddin Ghazal (Syria), Olga Rypakova (Kazakhstan), Akani Simbine (South Africa), Su Bingtian (China), Milcah Chemos Cheywa (Kenya) and Marie-Josee Ta Lou (Ivory Coast).
The Council is able to appoint up to six extra members to ensure that there is sufficient diversity within the athlete group to represent all disciplines and areas of the world.
The importance of athletes to decision-making within World Athletics was recognised and enshrined in legislation as part of the governance and integrity reforms approved in December 2016.
Under the 2019 Constitution, the Chairperson and one other member of the Athletes' Commission - one male and one female - become full voting members of the IAAF Council.
World Athletics president Sebastian Coe welcomed Lavillenie and Adams to the 26-member Council, saying he expected they would make a substantial contribution to the sport's decision-making body.
"Since my own competition days, I have been a strong advocate for athletes having a voice within sport. We want our athletes to be leaders and to contribute their opinions on the issues and challenges we face in steering a global sport with 214 member countries in a rapidly changing world. That will only make athletics stronger and more relevant to coming generations," Coe said. (ANI)

Sri Lanka: Mahinda Rajapaksa to be sworn in as PM today

Ordinance for indirect election of mayors promulgated in Tamil Nadu

SC reserves judgment on petitions over restrictions in...

Tougher pool will allow us to test ourselves early in tournament:...

Kathmandu [Nepal], Oct 13 (ANI): China would carry out a feasibility study on trans-border...

6 injured after helicopter crash-lands in Kedarnath during...