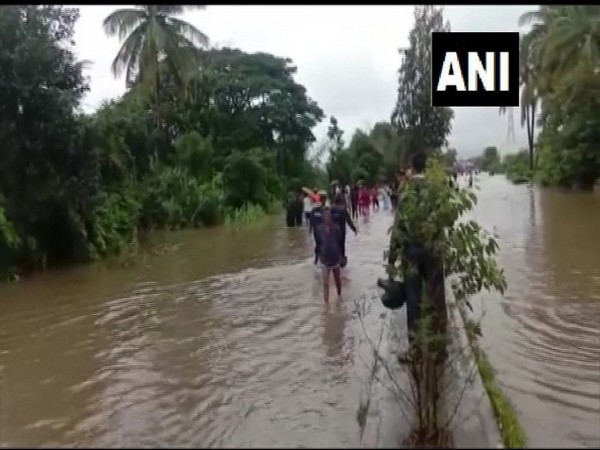 Pune (Maharashtra) [India], Aug 6 (ANI): Authorities are evacuating people from low-lying areas of Satara, Sangli, Kolhapur and Pune districts as a precautionary measure following the India Meteorological Department's prediction about heavy to very heavy rainfall over the next three days in Maharashtra, an official said Tuesday.
Over 50,000 people have been evacuated from flood-affected areas in Satara, Sangli, Kolhapur and Pune districts following flood-like situations caused by heavy rains in Maharashtra, Pune Divisional Commissioner Deepak Mhaisekar told ANI.
"We have evacuated more than 50,000 people from Satara, Sangli, Kolhapur and Pune following flood-like situation," he said.
Four teams of National Disaster Response Force (NDRF) has been carrying out rescue and relief operations in Kolhapur and Sangli district. Troops of the territorial army have also been deployed in the Pune region.
"The government has moved five additional NDRF teams from Bhubaneswar to speed up the rescue operations. A team of Navy personnel with a chopper have been called from Mumbai," he said.
The government completely closed the Pune-Bangalore Highway last night. "All passengers are advised to stay at either in Satara or Pune till the time the situation is under control," the officer said.
Maharashtra Chief Minister Devendra Fadanvis on Monday spoke to his Karnataka counterpart BS Yediyurappa to release water from Almatti dam to ease the situation in the region. (ANI)

UP in worst state of lawlessness: Brinda Karat after gang-rape...

'BJP-Shiv Sena polls pact for Maha polls to be announced...

All relief efforts being made for people affected by Patna...

Kathmandu [Nepal], Nov 25 (ANI): The construction work at the Dasarath Stadium in...

BJP lashes out at Akbaruddin Owaisi, says he is like a...

There might be conspiracy behind death of around 100 cows:...

The Consulate General of Belgium in Mumbai organises King's...