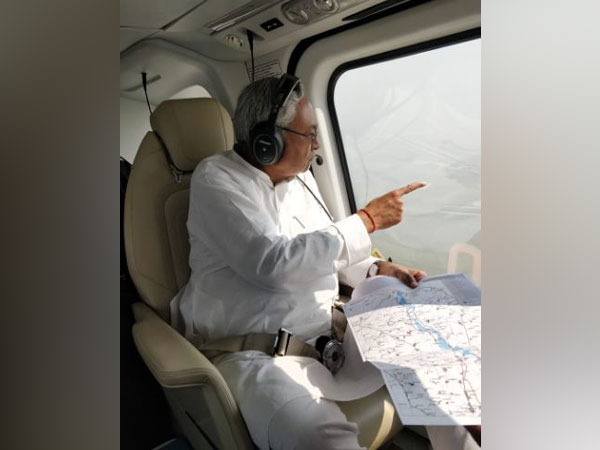 Madhubani (Bihar) [India], Nov 16 (ANI): Chief Minister Nitish Kumar on Saturday conducted an aerial survey of the flood-affected areas in Madhubani district.
The recent floods in the state wreaked havoc across 12 districts, including Sheohar, Dharbangha, Sitamarhi, North Champaran, Madhubani, Araria and Kishanganj which were severely affected due to rising water levels in rivers following torrential rains.
Earlier in September, Kumar conducted an aerial survey of the flood-affected areas of the state.
The National Disaster Response Force (NDRF) had deployed at least 19 teams in 14 districts of Bihar. Five teams are operational at Patna, two are deployed at Bhagalpur and one team each at Buxar, Munger, Begusarai, Gopalganj, Kishanganj, Katihar, Khagaria, Madhubani, Supaul, Vaishali, Araria and Darbhanga.
Around 50 houses in the Naruar village in the Madhubani district were destroyed due to floods.
On July 19, the Chief Minister had kickstarted the process of sending cash relief of Rs 6,000 directly into the bank accounts of flood-affected families. However, several people living in flood-hit areas claimed that they have not received any aid from the government.
On the other hand, on October 17, a complaint was filed against Bihar Chief Minister, Deputy Chief Minister Sushil Kumar Modi, several ministers and Patna Municipal Corporation (PMC) officials seeking action against them over the recent floods.
The complaint was filed in the court of Patna Chief Judicial Magistrate under several Sections of the Indian Penal Code (IPC) including 302 (murder) and (120B) criminal conspiracy.
The complaint urged the court to look into the matter, take cognizance against the accused in the given sections and suitably punish them.
The complaint, filed by an advocate, alleged that the lives of several people were lost and government and private property worth over Rs 100 crore was affected due to the "man-made" floods, caused "due to the non-maintenance of the drainage system" and the failure of the government machinery.
It said that even after 18-20 days, some of the affected areas were water-logged.
Over 73 people died in the floods in several parts of the state. (ANI)

Uttarakhand: Molester beaten up by brave girl in Haridwar...

How soft drinks are a critical link between obesity and...

Patparganj fire that claimed one is of medium category,...

New Delhi (India), Jan 9 (ANI): The fire that broke out at an establishment in Patparganj...