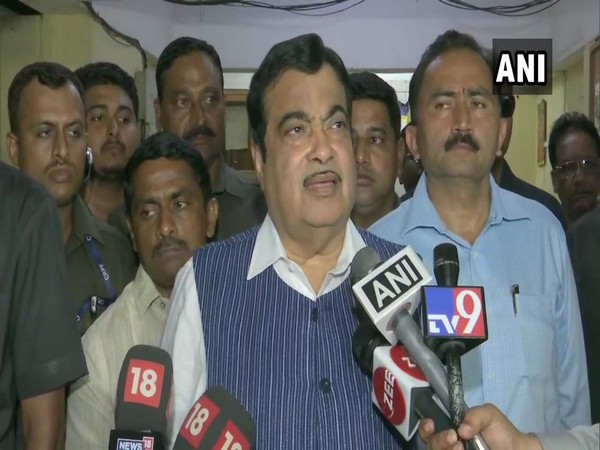 Mumbai (Maharashtra) [India], Nov 8 (ANI): Union Minister Nitin Gadkari on Friday said that the Bharatiya Janata Party (BJP) and Shiv Sena should form government in Maharashtra for the sake of welfare of the people.
"There is still time. I feel BJP-Shiv Sena should come together to form the government for the sake of welfare of the people," Gadkari told mediapersons here.
On being asked about the 50-50 formula that was agreed upon between the Sena and BJP prior to Assembly polls, he said: "As far as 50-50 formula issue is concerned, no such promise was made by Amit Shah."
The BJP and Shiv Sena, who are partners in the ruling alliance in Maharashtra, had fought the Assembly polls together on October 21. While the BJP emerged as the single largest party in the recently held elections, it is yet to stake a claim for government formation.

In the Assembly polls, the BJP emerged as the single largest party by winning 105 seats while Shiv Sena bagged 56 seats in the 288-member Vidhan Sabha.

Even after getting the required numbers to form the government, there has been a delay in cobbling up a coalition owing to differences between the two parties on power-sharing.

Shiv Sena has insisted that the two parties had a '50-50' power-sharing agreement before the elections. But Fadnavis has said that Shiv Sena was not promised the chief ministerial post for two-and-a-half years when the alliance was sealed before the 2019 Lok Sabha polls, leading to an impasse over government formation. (ANI)

Rahul Gandhi thanks SPG for working tirelessly to protect him, his family for years

SPG to only protect Prime Minister; Congress leaders did not avail bullet resistant...

Reservation will not go till caste system exists, says...

There is no normalcy in Kashmir, teen-aged children tortured...

Kerala CM should resign and say I don't have trust in Constitution,...

Indians said "Alexa, I love you", once every minute in...

We are against shifting of administrative capital to Visakhapatnam...