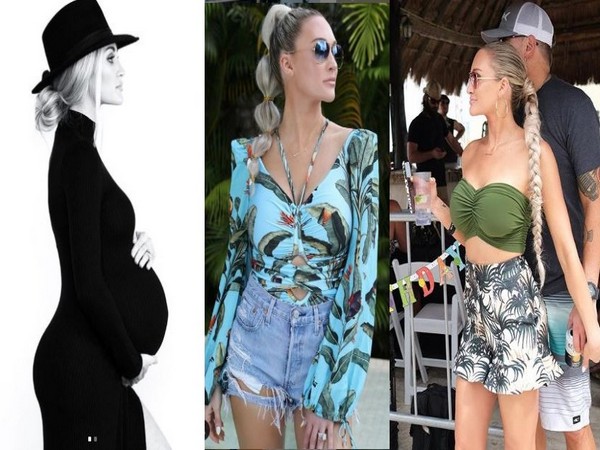 Washington D.C. [USA], Jan 30 (ANI): Jason Aldean's wife Brittany has pulled a lot of eyeballs as she flaunted her curves after losing almost 17 pounds.
The lifestyle influencer gained almost 40 pounds till she gave birth to her second child and now have managed to get back to shape, reports Fox News.
The 'South Beach Diet' ambassador welcomed a daughter named Navy Rome Williams last year.
Navy is the sixth kid at the Aldean household, along with Brittany and Jason's son Memphis, as well as Jason's daughters Kendyl and Keeley from his previous marriage.
"I gained 40 pounds with both of my children and it took me a lot longer to start feeling myself after my second [child]," Brittany Aldean, 30, told Fox News in a statement, also expressing: "I felt really down. Eventually, I came to a point where I knew that I just had to take charge."
She continued: "I really wanted to focus on my health and what I was putting into my body. I started South Beach and saw and felt the results almost immediately. I was a better 'me' both mentally and physically and I am thankful that I found a program that truly works as a lifestyle."
The lifestyle influencer is going to proudly show off her physical transformation, with the photographs for South Beach Diet rocking a medley of curve-hugging swimsuits.
"This shoot was so much fun because I felt comfortable in my skin again!" Brittany said. "I give credit to South Beach Diet because they have made it so easy. I take my meals, snacks and shakes on the road with me, which is so key for keeping me on track."
She also wanted to boost the confidence of her 1.5 million followers to take charge of their health and stressed that a proper diet is key for seeing results.
"I'm a firm believer that food is fuel," she explained. "Eating healthy gives me energy and let's face it, I need all the energy I can get with our busy life and these two babies running around! And, the new keto-friendly South Beach Diet just launched and I love it! It provides all the benefits of keto without being so strict."
Brittany and Jason, 42, exchanged their vows in 2015. (ANI)