Discussed, deliberated on steps to be taken ahead: Kharge after CWC meeting on Maha politics 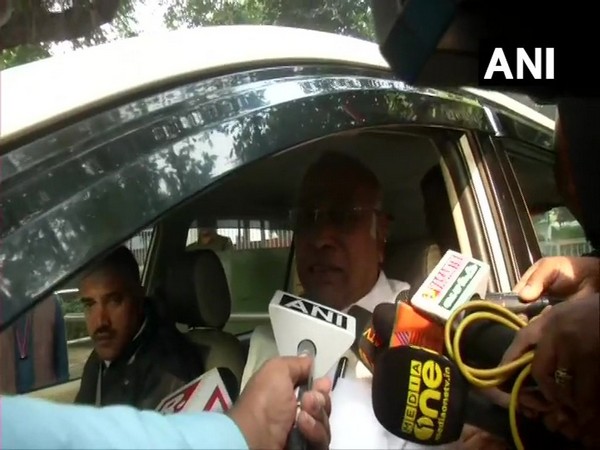 New Delhi [India], Nov 21 (ANI): Congress Working Committee (CWC) meeting was on Thursday held in Delhi to decide what steps need to be taken in future pertaining to the ongoing political crisis in Maharashtra, senior party leader Mallikarjun Kharge said.
The meeting was held at Congress interim president Sonia Gandhi's residence upon the issue of government formation in Maharashtra.
"The Congress Working Committee today discussed and decided what steps need to be taken ahead. We will now take steps as decided in the meeting," Kharge said after attending the meeting.
Apart from Kharge, senior party leaders KC Venugopal, Adhir Ranjan Chowdhury, Ambika Soni, Ahmed Patel, AK Antony and others participated in the CWC meeting.
The CWC meeting comes a day after multiple discussions took place between Congress and NCP leaders, following which Sonia Gandhi was also briefed on Wednesday.
Congress leaders including Ahmed Patel, Jairam Ramesh and Mallikarjun Kharge had briefed Sonia about their meeting with the Nationalist Congress Party (NCP) chief Sharad Pawar regarding the ongoing political crisis in Maharashtra.
Former Maharashtra chief minister and senior Congress leader Prithviraj Chavan yesterday said that there will be a joint meeting of the two parties in the afternoon today.
BJP, which emerged as the single largest party, could not stake claim to form a government as its ally Shiv Sena remained firm on rotating the Chief Minister's post and equal sharing of Cabinet berths.
Shiv Sena parted its ways with BJP only to explore ways to form a government. It, however, failed to prove the support of the required number of MLAs in the time given by Governor BS Koshyari.
The Governor had then invited NCP, the third-largest party, to prove its ability to form the government failing which President's Rule was imposed in the state.
The Shiv Sena is now in parleys with the Congress and NCP to form a government in the state.
Earlier this month, the President's rule was imposed in Maharashtra after none of the parties can forge a majority and stake claim for government formation. The BJP won 105 seats in the 288-member assembly followed by Shiv Sena 56, NCP 54 and Congress 44. (ANI)

Amethi: Priyanka visits kin of man who died in custody,...

Priyanka sheds crocodile tears in UP, but doesn't have...

Gandhis must understand that SPG cover only for PM: BJP...

I am Hindu but I also go to dargah: Congress Yashomati...

Sensex falls by 181 points, IT and auto stocks suffer