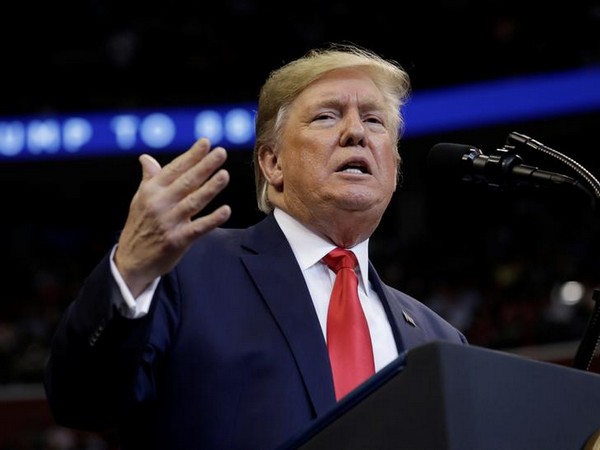 Washington [US], Dec 2 (ANI): US President Donald Trump slammed House Democrats for holding the first Judiciary Committee hearing on impeachment at the time when the President will be attending the NATO summit.
"The do-nothing Democrats decided when I'm going to NATO ... that was the exact time -- this is one of the most important journeys that we make as president," Trump told reporters at the White House as he departed for London on Monday.
He asserted that Republicans are united in opposing impeachment and the inquiry is backfiring on Democrats, adding "I think it is going to be a tremendous boost for the Republicans."
Trump Administration officials have accused Democrats of deliberately attempting to distract Trump from his work overseas by holding the first Judiciary Committee hearing on impeachment at the time when the president will be in London meeting with other NATO members.
Secretary of State Mike Pompeo said that he felt the decision to hold a hearing while "Trump is abroad went against precedent".
"I regret that they've chosen to hold these hearings at the same time that the president and our entire national security team will be travelling to Europe to London to work on these matters," the Hill quoted Pompeo as saying. "It's very unfortunate."
The White House said that it would not participate in the first impeachment hearings before the House Judiciary Committee scheduled for Wednesday as Democrats prepared to approve a report making the case for President Donald Trump's removal from office.
We cannot fairly be expected to participate in a hearing while the witnesses are yet to be named and while it remains unclear whether the Judiciary Committee will afford the President a fair process through additional hearings. More importantly, an invitation to an academic discussion with law professors does not begin to provide the President with a semblance of a fair process. Accordingly, under the current circumstances, we do not intend to participate in your Wednesday hearing," CNN quoted Pat Cippollone, White House counsel to the President, as saying in a letter to Chairman Jerrold Nadler.

The impeachment inquiry was launched by the US House Democrats back in September after a phone call made by Trump to the Ukraine President Volodymyr Zelensky for allegedly asking to investigate the Former Vice President Joe Biden.
Senate Minority Leader Charles Schumer (D-N.Y.) called on President Trump to testify as part of the House's impeachment inquiry in the wake of Speaker Nancy Pelosi (D-Calif.) offering to let him speak with the panel. "Speaker Pelosi invited President Trump to come to testify, and I think her invitation is correct. If Donald Trump doesn't agree with what he's hearing, doesn't like what he's hearing, he shouldn't tweet. He should come to the committee and testify under oath, and he should allow all those around him to come to the committee and testify under oath," Schumer said during a press conference in New York.(ANI)

Dangerous bacteria communicate with each other to avoid antibiotics: Study

Over 14,000 police personnel to be deployed in Mumbai for...

During alcohol during pregnancy alters genes in infants,...

Hindus, Sikhs unsafe in Pak, Imran Khan should think about...

No clean chit to Badals in Guru Granth Sahib sacrilege...

Jharkhand to give three-month 'relief' from fines under...