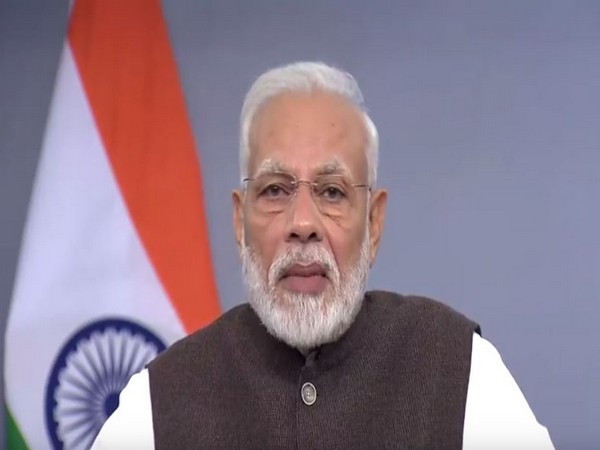 New Delhi [India], Jan 14 (ANI): Prime Minister Narendra Modi said on Tuesday that India's celebration of "harmony, diversity and brotherhood" and "will and zeal" of its people were two essential reasons that the country's great civilisation has prospered.
The Prime Minister made the remarks while participating in the 50th anniversary of Thuglak magazine through Video Conference.
He said economic success mixes beautifully with social reform in Tamil Nadu and the land is home to the world's oldest language.
"Dynamism of Tamil Nadu and the Tamil people amazes me," he said.
According to a PMO release, he praised the "illustrious progress" made by the magazine in the last 50 years and said it was based on facts, intelligent arguments and satire.
He regretted the passing away of its founder Cho Ramaswamy.
Referring to the dynamism of Tamil Nadu, the Prime Minister said the state had been guiding light for the nation for centuries.
"Tamil Nadu has been a guiding light for our nation for centuries. Here, economic success mixes beautifully with social reform. This land is home to the world's oldest language. In September last year, I had the honour of saying a few lines in Tamil during my United Nations address." he said.
Modi said as India enters a new decade, it is the people of India who will guide India's growth trajectory and take it to new heights.
"I have always believed there are two essential reasons that our great civilisation has prospered. The first is India's celebration of harmony, diversity and brotherhood. The second reason is the will and zeal of India's people. Whenever the people of India decided to do something, no force has been able to stop them," he said.
The Prime Minister urged the media to respect this spirit and keep pace with it.
"As governments or media houses, we will have to respect this spirit and keep pace with it. I would also like to appreciate the role of the media. They have taken forward every possible noble mission of nation-building be it cleanliness, reducing single-use plastic and protecting the environment. I hope this same spirit gets reinforced in the times to come" he said.
Referring to the development of Tamil Nadu, the Prime Minister said that the Union Government is taking several steps like establishment of one of the two defence corridors in Tamil Nadu.
"Over the last few years, unprecedented efforts have been put in for Tamil Nadu's progress. When we took the ambitious decision of setting up two defence corridors, Tamil Nadu was a certain choice for one of them. This corridor will bring more industry to the state and boost employment opportunities for Tamil youth, " he said.
The Prime Minister said that special efforts are being made for modernising the textile sector in the state.
"The textile sector plays a vital role in Tamil Nadu's progress. The Central Government is modernising the sector to help citizens. Financial assistance has been provided under the National Handloom Development programme. Two mega handloom clusters are to be set up. Resources have been allocated for machinery modernisation as well", he said.
He said that the government is also taking special steps for boosting the fisheries sector.
"Fisheries is one of the most upcoming sectors today. We want to make the fisheries sector more vibrant. Our focus is on technology, financial assistance and human resource development. Just a few days back, deep sea fishing boats and transponders were handed over to fishermen from Tamil Nadu. Our fishermen have been linked with Kisan Credit Cards. New fishing harbours have been built for fishermen. Help is being given for boat modernisation too," he said.
The Prime Minister urged people to visit 15 places in India in the next two years.
He said the government is focusing on tourism sector and India was given the 34th ranking in the Travel and Tourism Competitiveness Index of World Economic Forum.
He said it ranking had improved from 65th in 2014.
"I am happy to share that over the last five years, foreign tourist arrivals to India have gone up significantly. So has the foreign exchange earned from tourism" he said.
"You would be glad to know that Tamil Nadu is greatly benefitting due to the Union Government's Swadesh Darshan and Prashad schemes. The coastal circuit from Chennai to Kankyakumari, Kanchipuram and Vellankali are going to be made more tourist friendly," he added. (ANI)

Venkaiah Naidu departs for 5-day trip to Comoros and Sierra...