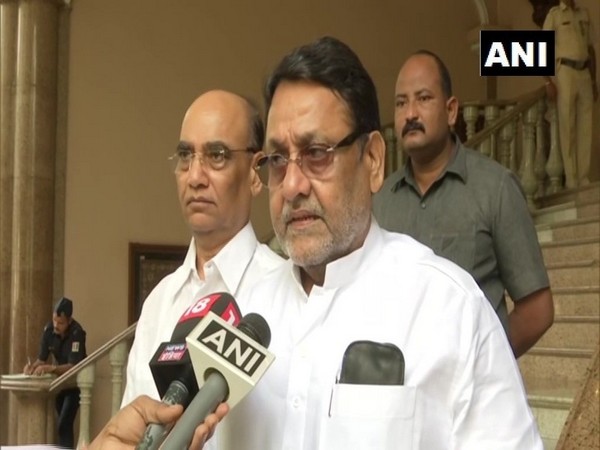 Mumbai (Maharashtra) [India], Sept 18 (ANI): Nationalist Congress Party (NCP) leader Nawab Malik on Wednesday expressed dismay and said there is no use of giving suggestions to Election Commission in connection with EVMs, as the election watch dog would not lend its ears.
Ahead of the Maharashtra Assembly elections, the Election Commission on Wednesday held discussion with the delegations of several political parties seeking suggestions from them.
"The Election Commission had called all the political parties today seeking suggestions from them for the upcoming Assembly elections. We have kept a few suggestions in front of the Election Commission - First, the expenditure limit of Rs 28 lakhs is very low as there is hike in prices of petrol, diesel, printing, and even the 12 per cent GST is there. So, they must increase the limit of expenditure," Malik said.
He shared that the parties have also suggested that election dates should be decided keeping in mind the festive occasion of Diwali.
"The Election Commission has assured us that they will take a positive decision after taking all the suggestions into consideration," he said.
On the issue of EVMs, Malik said, "We had not made any suggestion regarding EVM. If Election Commission is not going to listen, (then) there is no question to give any suggestion. But people of India have some kind of a reservation in their mind. They think that there are hackers. If hackers are there, jammers can also be provided... We will think about it."
Asked whether the party will raise this issue with the Election Commission in future, Malik said, "No, they are not ready. In democracy, if people of the country have some kind of a question, they must consider. But they are not ready to consider."
Malik further suggested that the expenditure limit should be increased up to Rs 60 lakhs.
Meanwhile, talking about the meeting, Shiv Sena leader Anil Desai said, "We have asked Election Commission to increase expenditure limit for Assembly elections and rationalise submission of criminal antecedents by candidates. The upper limit is set at Rs 28 lakhs. Of this, Rs 10-12 lakhs are spent on criminal antecedents." (ANI)

'Made in China' trailer: Rajkummar brings 'soup-er hit jugaad of the year'

Akshay Kumar just needed some greens to take away his blues!

Ready to meet anyone who has doubts over CAA: Amit Shah

Manipur: Isaac all set to be youngest to appear in Class...