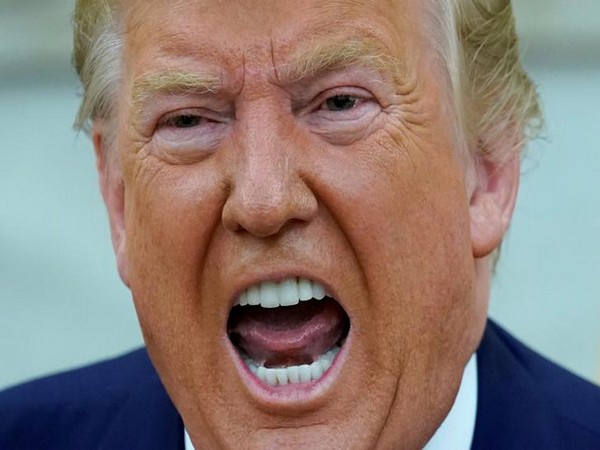 Washington [US], Oct 14 (ANI): A mock video of President Donald Trump shooting, assaulting and stabbing his critics and the media was played at a conference held by the pro-Trump group at his Miami resort last week, The New York Times reported on Sunday.
The video was shown at a conference for his supporters were Trump's top surrogates including his son Donald Trump Jr., his former spokeswoman Sarah Huckabee Sanders and the governor of Florida, Ron DeSantis, were scheduled to address.
The video, which includes the logo for Mr Trump's 2020 re-election campaign. The edited clip of movie Kingsman: The Secret Service" shows Trump's head superimposed on the body of a man who opens fire inside the "Church of Fake News". The people being shot at have the faces of his critics and logo of news organisations, including Politico, CNN, New York Times.
NYT said that the incident indicates how Trump "anti-media language" has influenced his supporters and bled into their own propaganda.
Revealing about the source of the video, NYT said that a person who attended the conference last week took a video clip on his phone and send it to the reporter.
The organizer of the event said in a statement on Sunday that the clip was played at the conference, as a part of a "meme exhibit."
"Content was submitted by third parties and was not associated with or endorsed by the conference in any official capacity," said the organizer, Alex Phillips. "American Priority rejects all political violence and aims to promote a healthy dialogue about the preservation of free speech. This matter is under review."
A person close to Trump's son said that he was unaware that the video had been played at the event. Sanders said that unaware of the video's existence until a Times reporter contacted her.
"I was there to speak at a prayer breakfast, where I spoke about unity and bringing the country together," Sanders said. "I wasn't aware of any video, nor do I support violence of any kind against anyone."
CNN has confirmed the video was played at the conference and not in the main ballroom and has released a statement over the incident.
"Sadly, this is not the first time that supporters of the President have promoted violence against the media in a video they apparently find entertaining -- but it is by far and away the worst. The images depicted are vile and horrific," CNN said in a statement Sunday night.
"The President and his family, the White House, and the Trump campaign need to denounce it immediately in the strongest possible terms. Anything less equates to a tacit endorsement of violence and should not be tolerated by anyone." (ANI)

XVU car rams into a shop in Vijayawada