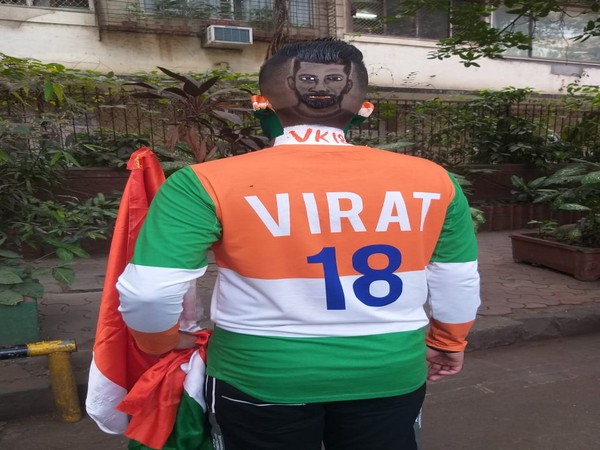 Mumbai (Maharashtra) [India], Jan 15 (ANI): During Tuesday's match between India and Australia at Wankhede Stadium here, one spectator was the cynosure of all eyes. Chirag Khilare, an ardent fan of Virat Kohli arrived sporting a hair cut that resembled Kohli's face.
"For many years now, I have been following Virat in every match in India and have been a fan of him since he became the captain of the Under-19 team."
Khilare says it takes him about six to eight hours to get the hair tattoo done and he gets ready to watch every match in which Virat features in exactly the same manner.
He said that he had seen glimpses of captain Kolhi many times but has not yet had a chance to meet him.
"My dream is to meet Kohli and when I will meet him, I will first touch his feet and hug him and capture that moment through a photograph."
India was defeated by 10 wickets by Australia in the first ODI of the three-match ODI series. With this victory, Australia now leads the three-match series 1-0.
After being put in to bat first, India scored 255 runs in 50 overs. The visitor chased down the total with the help of openers David Warner and Aaron Finch's centuries.
The second ODI between both teams will be played on January 17. (ANI)

Bajwa gets only 6-month extension; major blow to PTI govt...

Islamabad [Pakistan], Nov 28 (ANI): In a major blow to the PTI government and Pakistani...

Renovate your home this festive season with top-up loan...

UP: Residents of 'Pakistan Wali Gali' urge govt to change...

New players also have fighting spirit in their DNA, says...