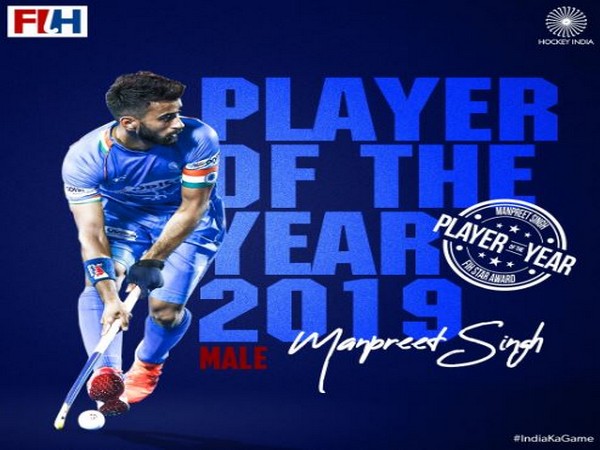 New Delhi [India], Feb 13 (ANI): Hockey India on Thursday congratulated Indian men team captain Manpreet Singh for bagged the FIH Player of the Year award.
Hockey India president Mohd Mushtaque Ahmad said: "I congratulate Manpreet for winning the prestigious FIH Player of the Year award."
"He has matured over the years as a player and has proved his importance in the team. He has led India to important victories. I hope he continues to contribute to India's success in the coming years as well," Ahmad said.
Singh has become the first member of India's national team to win the Best Player award since the awards were initiated in 1999. He was up against Belgium's Arthur van Doren and Lucas Vila of Argentina, who finished second and third respectively.
Singh made 260 appearances for the team since making his debut back in 2011. In 2019, as captain, he led his team to victory in the FIH Olympic Qualifiers, thus securing a spot at the Olympic Games Tokyo 2020.
The midfielder has also represented India at London 2012 and Rio 2016.
Singh said he is truly honoured to have won this award and dedicated it to his team.
"I am truly honoured to win this award and I would like to dedicate this to my team. I also thank my well-wishers and hockey fans from around the world for voting in my favour. It is truly humbling to see so much support for Indian Hockey. I wish we continue to receive more such support as we gun for glory this Olympic year," Hockey India's official website quoted Singh as saying. (ANI)

NPR will be defeated if states refuse to implement it: Chidambaram

Langer says not 'humanly possible' for Cummins to play...