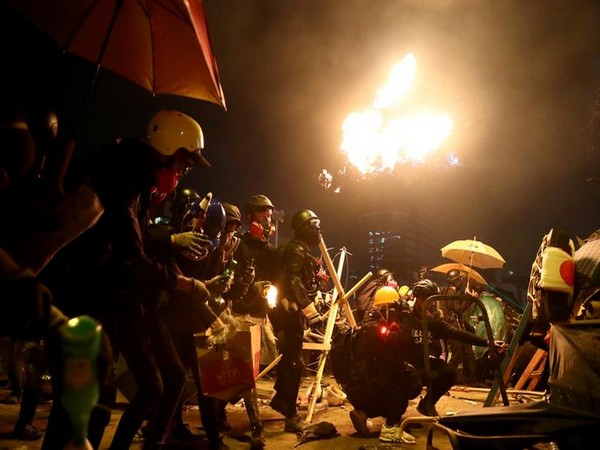 Hong Kong, Nov 18 (ANI): After an extremely violent day, which saw fierce clashes between the two sides, police stormed the Hong Kong Polytechnic University campus held by pro-democracy protestors, early on Monday (local time) before retreating in face of growing fire.
The New York Times reported that "the Hong Kong Police early Monday morning tried to enter in force the university campus" that the protestors had held for several days.
Though the police were able to arrest a few protesters at the outer edges of a barricade protecting the university, they soon retreated after other students set the barricades on fire and threw dozens of petrol bombs at the police, it stated.
The developments mark a dramatic escalation in the several months' struggle for democracy which began over a controversial bill.
South China Morning Post (SCMP) reported that Police had besieged Hong Kong Polytechnic University on Sunday night warning people to leave or face action for 'taking part in a riot."
Sunday saw both sides stepping up their use of violence with protestors shooting an arrow and hurling petrol bombs and bricks while the Police fired a large quantity of tear gas. A Hong Kong Police Officer also sustained injuries after being shot in the leg with an arrow.
According to SCMP, PolyU issued a statement condemning the behaviour of those occupying the campus saying "the unlawful activities and acts of violence inside the campus and in its vicinity have been escalating, including damage to a number of laboratories on campus with the dangerous chemicals inside being taken away."
The past few days have witnessed some of the most violent scenes in Hong Kong since the beginning of the protests back in June, including the death of a 70-year old man, who had sustained a head injury during clashes between government supporters and anti-government protesters in Hong Kong earlier this week.
Prior to that, a student protester had died after sustaining a fatal head injury in a parking garage close to the scene of a protest. His death triggered a fresh wave of protests in the city, which left over 30 people injured and over 287 arrests. (ANI)

Georgia: Protestors from Opposition block all entrances to Parliament

Section of JNU teachers urges students to end protests, get back to academics

2 dead in shooting at a bar in South Carolina

'Pak shedding crocodile tears over J-K is worth exposing'

Workplace burnout: Here's how managers can spot it and...

Man sprays chilli and pepper on woman on way to Sabarimala...

China wants India and Pakistan to join hands, have good...