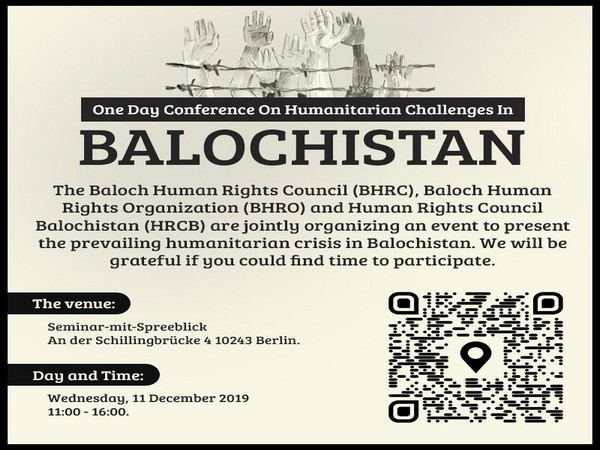 London [UK], Nov 15 (ANI): Three human rights groups working to protect and promote the rights of the Baloch people will jointly hold a one-day conference on the situation in Balochistan.
The conference will be held in Berlin by Baloch Human Rights Council (BHRC), Baloch Human Rights Organization (BHRO) and the Human Rights Council of Balochistan (HRCB) on December 11, according to the official social media handles of these groups.
The conference comes at a time when the Baloch people are facing the worst human rights abuses perpetrated by the authorities in Pakistan. In recent years, the scale and impact of these atrocities have increased exponentially. Many actions of the state in Balochistan come into the category of genocide, crimes against humanity and war crimes.
The distinguished speakers in the conference will highlight various aspects of human rights violations in Balochistan. The event will focus on state vs people conflict, political abductions, torture and extra-judicial murders, violence against women and children and state-sponsored religious extremism in the province.
According to the Baloch human rights groups, Pakistan army and the country's spy agencies, the ISI and Military Intelligence, are involved in kidnappings, torture and extra-judicial killings of the Baloch people. Thousands of Baloch youth, including women, are missing and their families continue to protest for their safe release from the secret detention centres. (ANI)

Process has begun for govt formation, no question of mid-term elections: Pawar

Burj Khalifa lit up with Bapu's images on Gandhi Jayanti