Indebted to get an opportunity to do something for country: Rohit Sharma 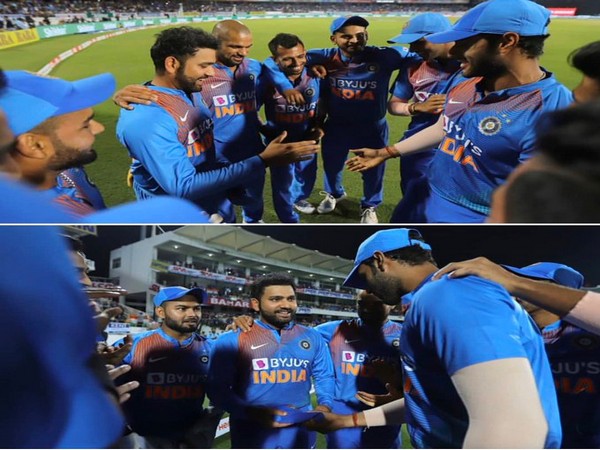 New Delhi [India], Nov 8 (ANI): After becoming the first Indian male cricketer to play 100 T20Is, stand-in skipper Rohit Sharma on Friday said that he is indebted to have the opportunity to do something for the country.
Rohit had played a match-winning knock of 85 runs in the second T20I of the three-match series against Bangladesh on Thursday to help the side to level the series 1-1.
"Be it whichever format, I'm indebted to have this opportunity to do something for the country. I have cherished all these times and will do so forever," Rohit tweeted. 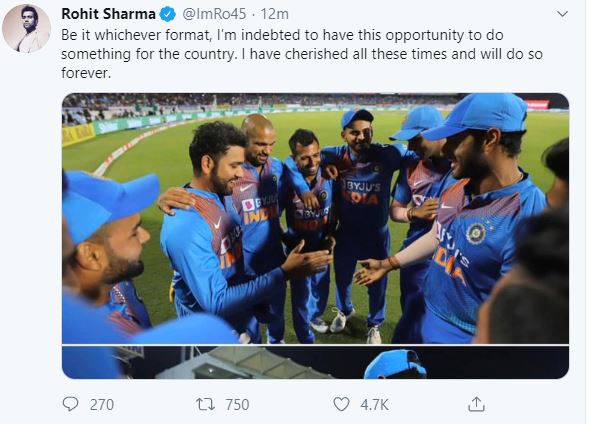 Bangladesh had managed to score just 153/6 in the allotted twenty overs and Rohit's knock of 85 runs helped India chase down the target with eight wickets in hand and 26 balls to spare.
Mohammad Naim and Mahmudullah's knocks of 36 and 30 respectively had enabled Bangladesh to post a score of 153/6 in the allotted twenty overs.
Yuzvendra Chahal scalped two wickets for India and he was the key bowler as he put a hold on Bangladesh's run-rate.
Rohit on Thursday became the first Indian male cricketer to play 100 T20Is.
Women's T20I skipper Harmanpreet Kaur is the only other Indian to have played 100 T20Is.
Apart from Sharma, wicket-keeper batsman, MS Dhoni is the most experienced men's cricketer in the T20I format as he has played 98 games.
Pakistan's Shoaib Malik is the only men cricketer to have played more than 100 T20Is.
Sharma had surpassed Dhoni in the first T20I against Bangladesh to become the most capped Indian men's player in the 20-over format.
In the same match, he also went past Virat Kohli to become the leading run-scorer in the shortest format of the game.
Bangladesh had defeated India on Sunday by seven wickets in the first T20I of the three-match series. This win was Bangladesh's first over India in the shortest format of the game.
India and Bangladesh will next lock horns in the final T20I of the three-match series on Sunday, November 10 in Nagpur. (ANI)

BJP formed govts in K'taka, Goa, Manipur despite numbers not in their favour: Gehlot

Nagal goes past Federer in the first set at US Open

Proud to be your son: Ben Stokes on dad's recovery