Influential Pak cleric calls for re-elections in next 3 months 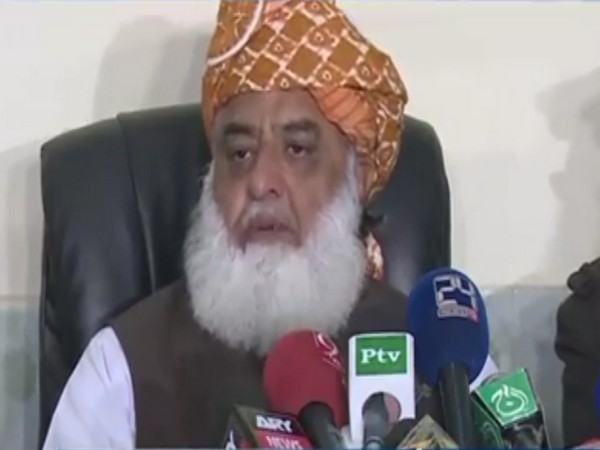 Islamabad [Pakistan], Nov 25 (ANI): Influential Pakistan cleric and Jamiat Ulema-e-Islam-Fazl (JUI-F) chief Maulana Fazlur Rehman on Monday called for re-elections to take place in the country within the next three months.
In an interview to a private news channel during a current affairs program, Rehman said that the opposition's Rehbar Committee made a straightforward demand that they wanted Prime Minister Imran Khan's resignation or something at par with the resignation, Express Tribune reported.
"We are getting what we asked for, new elections will be held within three months from now," the Maulana said while asserting that the political scenario in the country will change drastically soon.
The Rahbar Committee is a conglomerate of all opposition parties in Pakistan formed to decide whether to negotiate with the government or not on the 'Azadi March' as the parties rolled back their plans to hold direct talks.
Rehman, the patriarch of the 'Azadi March', has further called an all-party conference (APC) in Islamabad on Tuesday to deliberate on the next course of action for the anti-government campaign by the opposition.
The conference will be hosted by the JUI-F leader and, according to sources, notices have been issued to nine parties so far in order to decide a strategy against the ruling Pakistan Tehreek-e-Insaf.
Fazl telephoned Pakistan Peoples Party (PPP) Chairman Bilawal Bhutto-Zardari and Pakistan Muslim League-Nawaz (PML-N) General Secretary Ahsan Iqbal to discuss the political situation in the country, especially after the Azadi March.
The other parties that have been invited are Pakhtunkhwa Milli Awami Party, Awami National Party, Jamiat Ulema-i-Pakistan and Jamiat Ahle Hadith.
According to media reports, PML-N Vice-president Maryam Nawaz has decided against attending the conference.
The 'Azadi March', continuing since last month, has travelled long, slogan-laden miles within Pakistan and converged to drop anchor in the country's capital, Islamabad. The primary demand of the march and the 'dharna' (sit-in) is the resignation of Khan, who has quite expectedly refused to oblige.
It should also be noted that Imran Khan is getting a taste of his own medicine as he, being the opposition leader in 2014, had led a similar anti-government caravan seeking ouster of then Prime Minister Nawaz Sharif.
Four inconclusive rounds of talks between representatives nominated by Khan and the Rahbar committee of the opposition parties led by Fazlur Rehman have already been held, and media reports suggest that these talks have not made much headway towards finding a way to defuse the escalating crisis.
Maulana Fazlur, a religious leader who is also among the most pragmatic and deft politicians in Pakistan, had in June this year announced that his party would hold a long march to Islamabad in October. The march kicked off from the port city of Karachi on 27 October, with rallies from Balochistan province also joining the march in Karachi, and descended upon Islamabad on October 31.
The most remarkable feature of the Maulana's march was the massive number of participants that he succeeded in attracting, and despite wide variations in the figures claimed by the different factions based on their leanings it was clear that with close to 100,000 people this was the biggest such congregation at a political rally in Pakistan in the last several years. (ANI)

Greenhouse gases leave lakes warm on top and cold below:...

Unemployment growing due to upsurge in new technology:...

Today was 'black spot' in history of Maharashtra: Ahmed...

Tarantino did cut quite a lot: Damon Herriman on his role...

Kejriwal to take oath as Delhi CM on Feb 16

Lucknow (Uttar Pradesh) [India] August 21(ANI/NewsVoir): In a bid to improve the...