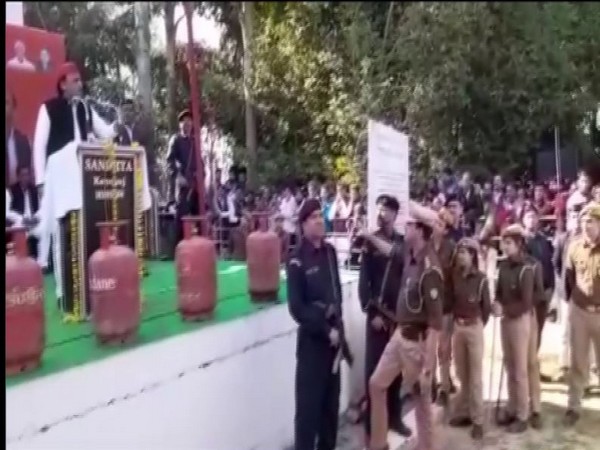 Kannauj (Uttar Pradesh) [India], Feb 15 (ANI): Samajwadi Party chief Akhilesh Yadav on Saturday alleged a threat to his life from BJP after a man went near the dais and started chanting 'Jai Shri Ram' slogans while he was addressing an event.
The incident took place in Kannauj on Saturday when former Uttar Pradesh chief minister Akhilesh Yadav was addressing a women's conference.
The man who jumped the barricade to reach out to Akhilesh Yadav has been identified as Ashok Shukla.
During the address, when Akhilesh attacked the BJP government over the unemployment issue, the man present in the crowd stood up and interrupted him from speaking. Soon, he reached near the dias as he was inaudible to the SP chief. Suddenly, he started shouting 'Jai Shri Ram' slogans.
After being caught by the security present at the event, Akhilesh asked Shukla as to which party he belongs to. In retaliation, the intruder started shouting slogans of 'Jai Sri Ram'.
Later, Akhilesh Yadav scolded an on-duty police officer and asked him to take away the intruder.
During the speech, Akhilesh targeted the BJP government in the state. He said, "We have been threatened by a BJP leader right now and this happened. He could kill us." (ANI)

J&K: Arrangements for smooth celebration of I-Day in place

New Delhi [India], Dec 17 (ANI): The Department of Revenue is eyeing to collect...