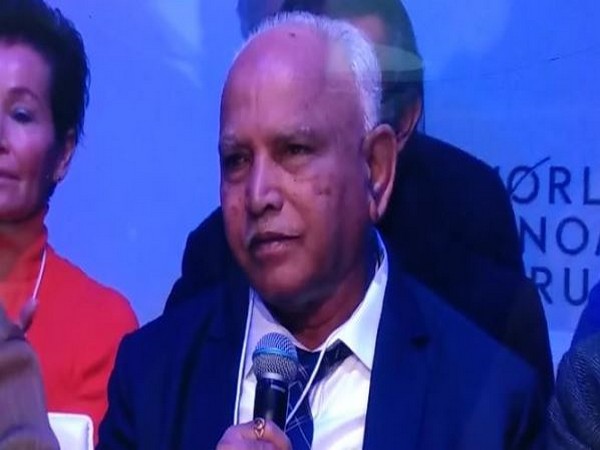 Davos [Switzerland], Jan 24 (ANI): Karnataka Chief Minister B S Yediyurappa on Thursday said that states have to gear up for high economic activities to make Prime Minister Narendra Modi's vision of USD five trillion economy, a "reality".
Yediyurappa made his presence felt at the World Economic Forum's (WEF) 'Strategic Outlook: India' session which was addressed by Union Minister Piyush Goyal.
The Chief Minister who got an occasion, to sum up, the panel discussions said. "States' growth is vital for the country's economy as all economic activities in India happen in states. If we have to make Prime Minister Narendra Modi's five trillion economy a reality, then states have to gear up for high economic activities."
He continued, "My home state of Karnataka has a state GDP of 250 billion dollars and a growing rate of nine per cent. We are here at the WEF to meet investors and industrialists to invite them to invest and grow their business in India", adding that "he is optimistic and looking forward eagerly to see investors making a rush to Karnataka."
"I am delighted to know that investors have taken note of Prime Minister Narendra Modi's vision of five trillion economy. I am feeling elated following WEF selecting him for summing up and commenting on the session's deliberations" he said while thanking the WEF organisers for giving an opportunity to speak at the forum.
Union minister Piyush Goal also addressed and participated in the panel discussion. (ANI)

US urges Pak to show action against proscribed outfits...