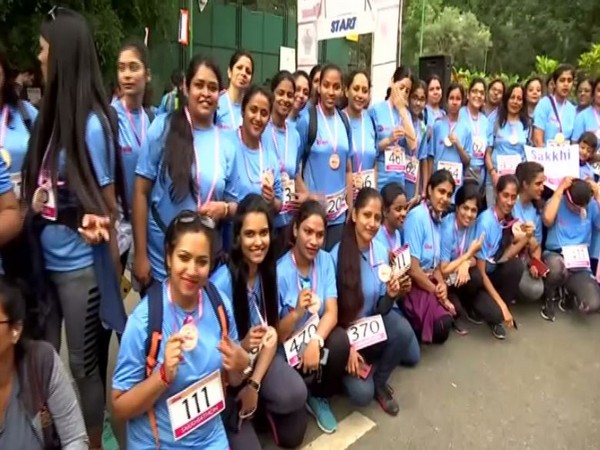 Bengaluru (Karnataka) [India], Oct 20 (ANI): Celebrating October as 'Pink Month' to create awareness about breast cancer among the women, scores of people of all ages took part in 'Walkathon' in Bengaluru on Sunday.
The event was organised to increase attention and support for the awareness, early detection and treatment as well as palliative care of this deadly disease.
Dressed in sky blue colour t-shirts and wearing a pink badge, participants were heard sloganeering and were also sharing their views amongst others about the disease.
"It is very important now to create awareness about breast cancer as a lot of women nowadays are falling prey to it. Our aim is also to create awareness among young women. They should know the symptoms at the beginning," said Radha Stravana, a volunteer.
Interestingly, a lot of young girls studying in school also participated in the event with full fervour and confidence.
"It is hard for women to talk about breast cancer in public. We are here to hold discussions on the same. This will give more power to them. With such programs, our opinions are heard. We are happy that we are doing something for the development of the women in society," said Anshi, a school student and a volunteer.
"Nowadays, we do not want to give much attention to issues such as breast cancer. No one should be ashamed of this. Such events will create awareness and help people to come forward," said another girl student while speaking to ANI.
If one looks closely, the cancer burden in India has doubled in the past two decades. The highest increase among all therapy areas, with breast cancer being the most common among Indian women, according to a report published by the Indian Council of Medical Research (ICMR) in 2018.
The data collected by the organisation revealed that India had 14 lakh cancer patients in 2016 and this number is expected to increase. "Breast cancer is currently the most common cancer among Indian women, both in terms of incidence as well as mortality, with proportional prevalence in younger age-groups being higher than the global average."
"The age standardized rate is approximately 25.8 per one lakh women and is expected to rise to 35 per one lakh women in 2026," the report read.
Breast cancer awareness month is a yearly campaign that intends to educate people about the importance of early screening, test and more. This campaign starts on October 1 and ends on October 31 every year. (ANI)

Trade negotiations between India, US going in full swing: Sitharaman