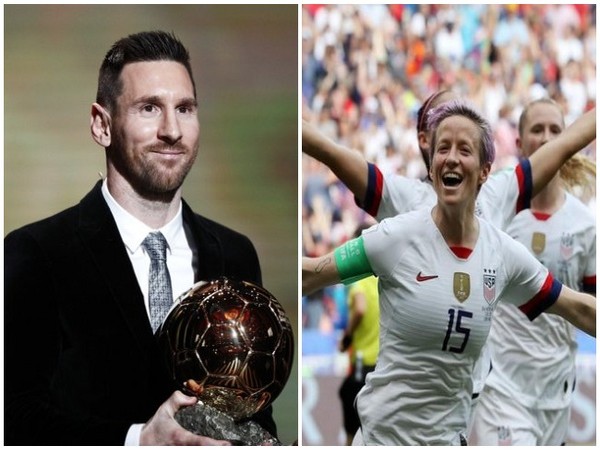 Paris [France], Dec 3 (ANI): Barcelona striker Lionel Messi claimed a record sixth Ballon d'Or award while USA women's World Cup superstar Megan Rapinoe picked up the coveted accolade for the second time here on Monday.
Messi, who last won the Ballon d'Or in 2015, moved one ahead of Christiano Ronaldo after the pair had won five awards each. It was Croatia's Luka Modric who was bestowed with the title last year after ending a decade-long dominance between two celebrated football icons.
The Argentine superstar finished fifth in last term's rankings and was in red-hot form for Barcelona, hitting 40 strikes this calendar year and registering a further 17 assists to boot, Goal.com reported.
Messi also won a tenth La Liga trophy and a Supercopa de Espana title. However, his team was denied a victory in the Copa del Rey final as they lost to Valencia by 1-2 and was battered 4-0 at Anfield by a rampaging Liverpool, who went on to claim the Champions League trophy.
The 32-year-old finished as the top scorer in both La Liga and Champions League and has already won the FIFA's 'The Best Men's' award as well.
On the other hand, Rapinoe, became the second woman ever to win the Ballon d'Or title after Norway's Ada Hegerberg.
The American was bestowed with the coveted award after a fabulous year in which she helped the USA win the Women's World Cup for the second time in her career and winning both the Golden Boot and Golden Ball at the tournament. She was also named player of the match in the final.
Rapinoe has also won 'The Best FIFA Women's Player' award earlier this year. (ANI)

Focus needs to be on winning more trophies: Liverpool's...