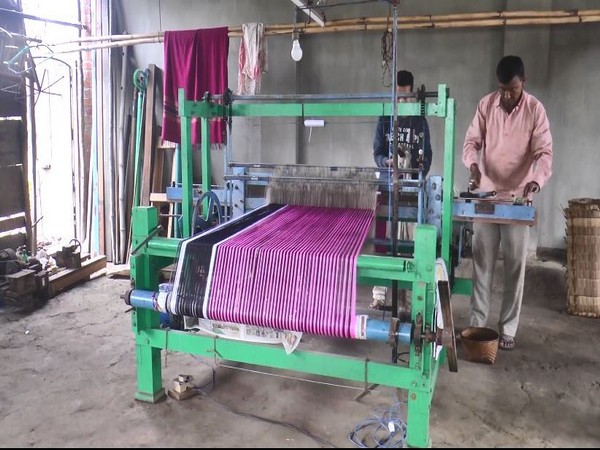 New Delhi [India], Nov 29 (ANI): Manipur is known for contributing a great deal to the handloom and handicrafts industry with its distinct cultural aesthetics and traditional fabrics. Realising the rise and potential of the local weavers in the region, a quinquagenarian -- Magha Yambem
-- has brought a shift in the age-old practices as he adopted to new!
Turning an early innovator, the 55-year old upgraded from the traditional ways of making Manipuri shuttle loom, which now runs fully automatic with the help of a half-horsepower motor.
"I was a furniture carpenter for around 12 years. However, almost all the furniture house businesses in our area were dying due to heavy loss of income. So I changed my profession. My first creation was the wooden loom to weave 'phanek' (wrap around), but that required a lot of oil and grease," explained the power loom innovator.
Hailing from Charangpat Mamang Leikai, Thoubal district, Manipur, Yambem developed the prototype of the modified power loom in 2018. His first electrically powered loom was made of a wooden frame and was later upgraded with iron and steel.
This ethnic stripes pattern is called 'Thambaleikhok Phanek,' which is one of the most common wraparounds worn by Manipuri women.
With an output 25-50 times more than the traditional shuttle loom, this machine can weave 40 meters of fabric per hour, whereas the traditional one could hardly make 1-2 meters fabric in a day.
"This machine can create all sorts of cotton products and the demand is very high too, especially during the season of marriage, when demand for patterns like Thambaleikhok, Thambal Leina picks up," said Yambem.
He said that it takes almost 20-28 days to make a modified power loom. So far, 40 pieces of the modified power loom, which costs around 80-90 thousand rupees a piece, have been sold with three different kinds of models.
Commenting on his father's innovation, Yambem Priyokumar said: "I feel the power loom sector in the state is still weak though the demand for handloom products is high. I see Manipur is improving. So if there would be companies for us to invest, we can supply the products to all the northeastern regions and help us grow in the loom sector and provide more employment to the youths." (ANI)

Andhra Pradesh govt to set up university for skill development

Strike to continue until demands are met: JNUSU president after meeting HRD Ministry...

Priyanka Gandhi should not do politics over work done in...

SpiceJet to shift entire operation to terminal 2 of Mumbai...

Pak: Protests erupt in Kasur over rape, murder of 3 minor...

I never had desire to enter politics: PM Modi