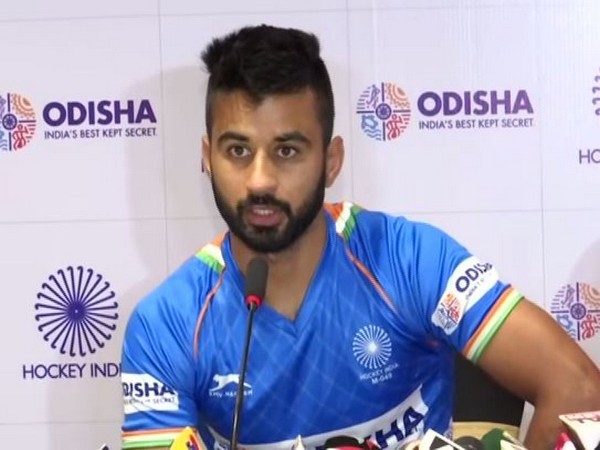 New Delhi [India], Jan 13 (ANI): Manpreet Singh to lead 20-member Indian Men's Hockey team for the upcoming FIH Hockey Pro League 2020.
Hockey India announced on Monday that Harmanpreet Singh will be Vice-Captain of the Indian team for the forthcoming tournament, which will be held at the Kalinga Hockey Stadium in Bhubaneswar.
Chinglensana Singh returns to the squad after a year-long break. He was out of the squad after suffering an injury.
Sumit also makes a comeback too after suffering a wrist injury during the clash against South Africa in the FIH Men's Series Final in June.
India Hockey Chief Coach Graham Reid said that Varun Kumar will join the team in the training for the upcoming FIH Hockey Pro League 2020.
"We have chosen a relatively experienced team to take on the Netherlands this weekend in Bhubaneswar. While Varun Kumar will be back in training this week after suffering a nerve injury during the Olympic Qualifiers, he wasn't able to be considered for selection. We will, however, get a chance to see Chinglensana return to international competition after a full year out and Sumit returns after a 6-month hand injury. Both have been training well and are physically fit. Gurjant has also shown great form in training and has earned his spot back in the team," Reid said in a statement.
He said that it will be very crucial to start well as the side will be facing the top three teams of the world in the first three encounters.
"It will be important to start strong and sharp in the Pro League with our first 3 encounters against the top 3 teams in the world. We will be focussing on getting our structures right and honing our set plays as preparation for our Olympic campaign," he said.
India squad: Manpreet Singh (Captain), Harmanpreet Singh (Vice-Captain), P R Sreejesh, Krishan Bahadur Pathak, Gurinder Singh, Amit Rohidas, Surender Kumar, Birendra Lakra, Rupinder Pal Singh, Vivek Sagar Prasad, Chinglensana Singh, Nilakanta Sharma, Sumit, Gurjant Singh. S V Sunil, Lalit Kumar Upadhyay, Mandeep Singh, Akashdeep Singh, Gursahibjit Singh, Kothajit Singh Khadangbam.
India will take on World No.3 the Netherlands on January 18 and 19 in the upcoming FIH Hockey Pro League. (ANI)

BJP MLA demands 'Tanhaji' to be declared tax-free in Maha

Maymol Rocky names 30 players for training camp ahead of...

Bravery award winner writes to SC to prevent children from...

NRC fiasco exposed those who tried to take political mileage...