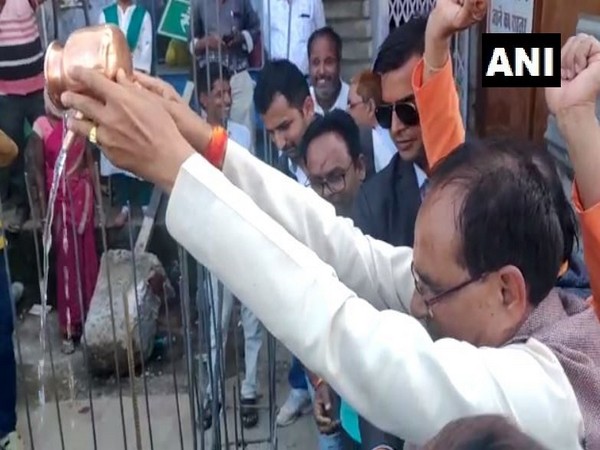 Sausar (Madhya Pradesh) [India], Feb 15 (ANI): BJP leader and former Madhya Pradesh chief minister Shivraj Singh Chouhan on Saturday visited Sausar town in Chhindwara district and worshipped at the place where the statue of Chhatrapati Shivaji Maharaj was eliminated by the state authorities.
He was seen performing puja at the spot from where the statue was removed by the state government on February 10.
Shivraj earlier in the day accused Congress of "insulting" Chhatrapati Shivaji by removing his idol.

The bust, which was placed on a platform at Mohgaon Square intersection, was removed on Monday night.

"Chhatrapati Shivaji is the nation's pride. The Congress government has disrespected him by removing his idol. A JCB was used to remove the bust. They tried to demolish the idol. It has become a tradition of Congress to disrespect great personalities," he told reporters here.

"Madhya Pradesh and India will not tolerate it at all. The investigation should be carried on those who disrespected Chhatrapati Shivaji," he said.

On Tuesday, protests erupted after the removal of the bust in Sausar, situated around 56 kilometers from Chhindwara. (ANI)

JDU MP's son claims his mother is locked in farmhouse,...

UP: Professors voice support for students protesting against...

Mumbai (Maharashtra) [India], Jan 8 (ANI/NewsVoir): In a first of its kind partnership,...

Have asked for immediate remedial action: MEA on forced...