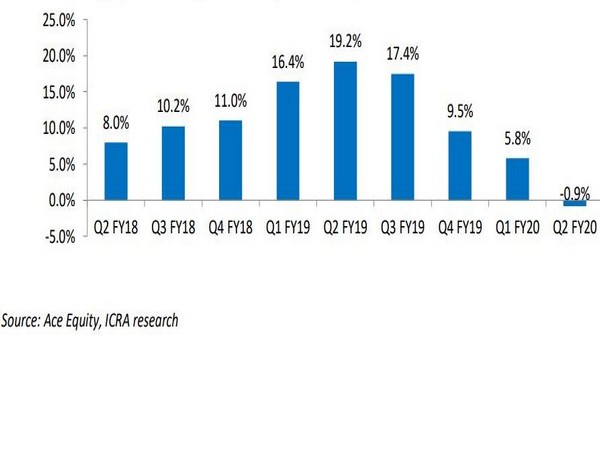 New Delhi [India], Dec 2 (ANI): India Inc delivered an expectedly weak performance during the second quarter of the current financial year
(Q2 FY2020), reeling under the impact of continued weakness in consumer sentiments and a general slowdown in the economy.
An ICRA analysis financial results of 609 companies in the Indian corporate sector (excluding financial sector entities) showed a year-on-year and sequential contraction in revenues for the first time in almost four years with aggregate revenues contracting by 0.9 per cent year-on-year.
During the same period, the EBITDA (earnings before interest, tax, depreciation and amortisation) margin contracted by 32 basis points on a year-on-year basis and by 100 basis points sequentially to 16.7 per cent.
The major impact on revenues came from commodity-linked sectors, revenues from which contracted by 5 per cent year-on-year as well as sequential basis. Consumer sentiment too continued to remain muted as reflected in year-on-year contraction of 1 per cent in revenues from consumer-oriented sectors.

Additionally, demand from the infrastructure segment was down due to extended monsoons, slow release of funds from the government, cancellation of orders and a marginal decline in housing demand.
"The revenues of the Indian corporate sector in Q2 FY2020 were primarily hurt by consumer and commodity-linked sectors," said Subrata Ray, Senior Group Vice President for corporate sector ratings at ICRA.
"Several consumer-linked sectors exhibited continued weakness with automobiles sales contracting by sharp double-digits while FMCG volumes also sequentially slowed down on the back of slowing urban demand and subdued rural demand sentiment."
On the other hand, tepid realisations driven by softening commodity prices coupled with subdued volumes in light of the macroeconomic slowdown resulted in revenue contraction for all major commodity sectors, including oil and gas entities, metals and mining, and iron and steel, said Ray.
In terms of sector-specific trends, consumer-linked sectors like automobiles and FMCG continued to report year-on-year and sequential weakening. Within the automobile sector, the passenger vehicle segment which had started weakening from Q2 FY19 as ownership costs increased and the macroeconomic environment weakened continued to remain sluggish.
Although FMCG companies reported volume growth, there was a further sequential slowdown in volume growth in both rural and urban markets.
Cement production volume growth also slowed down significantly to 1 per cent (compared to 13 per cent in FY19), given the continued slowdown in infrastructure, housing, industrial and commercial sectors due to extended monsoons, slow release of funds from the government, cancellation of orders and a marginal decline in housing demand.
Steel consumption, on the other hand, grew by 8 per cent during the quarter on a year-on-year basis.
Among other sectors, the IT sector reported revenue growth of 9 per cent in Q2 FY20 (in rupee terms) supported by in-organic growth, rupee depreciation on a year-on-year basis and traction in digital offerings across verticals.
Gems and jewellery grew by 22 per cent on the back of an increase in gold prices. Additionally, sectors like airlines, pharmaceuticals, and telecom helped arrest the extent of revenue contraction.
Going forward, much of the revival in corporate sectors performance will be dependent on the revival of consumer sentiments, a pick-up in infrastructure investments which may help revive demand in the commodity sectors, said Ray.
"Though the recent policy measures are welcome, the impact of the same will get reflected after a lag. With half of FY20 already gone, any significant recovery in performance will be very tough, he added.
(ANI)

Adhir Ranjan Chowdhury's DNA is that of Congress, praising infiltrators and Rohingyas:...