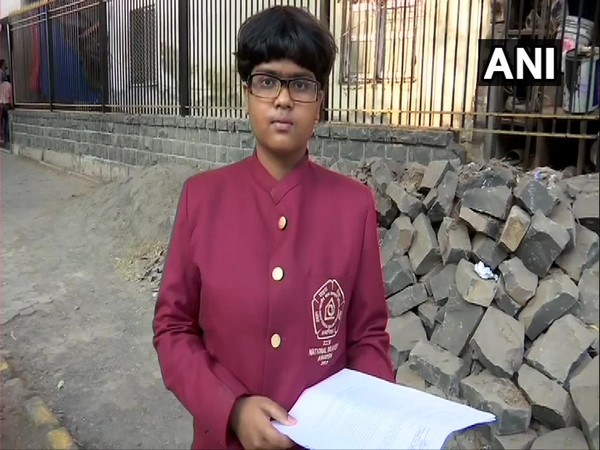 Amravati (Maharashtra) [India], Feb 15 (ANI): Zen Sadavarte, a National Bravery Award winner of this year, on Saturday met Additional Director General of Police and filed a complaint over the alleged incident where administration of a girl's college in Amravati made students pledge against love marriage on Valentine's Day.
Speaking to ANI, the 12-year-old Zen said, "I met the ADG law and order and have registered a complaint and my complaint is taken as an FIR by the ADG and action will be taken on the concerned people and the management of the college."
This complaint comes after students at an all-girls college in Maharashtra were allegedly made to take a pledge against the concept of love marriage on Valentine's Day.
"The teachers and the management have violated the natural justice of the Right to Conscience and were forced to take an oath in the university celebrated Valentine's day," she added.
Meanwhile, Rajendra Havre, Principal of Mahila Arts and Commerce College in Amravati has tendered a written apology over the incident.
"Due to the oath administered in the college, the sentiments of some people may have been hurt. The issue of personal freedom has also come up. We apologie to all the people of the country expressing regret," the statement read.
The principle also said that the oath was not administered with the intent to hurt the sentiments but to educate the students so that they stay focused towards their career. (ANI)

Notice issued against The Park Hotel over fire incident

Shiv Sena MPs not present in RS during voting on Citizenship...

Kanye West's 'Jesus is King' movie to release in October

Delhi: Scuffle breaks out between Delhi Police and lawyers...