Odisha: Pradhan flags off 'Run for Unity' event in Bhubaneswar 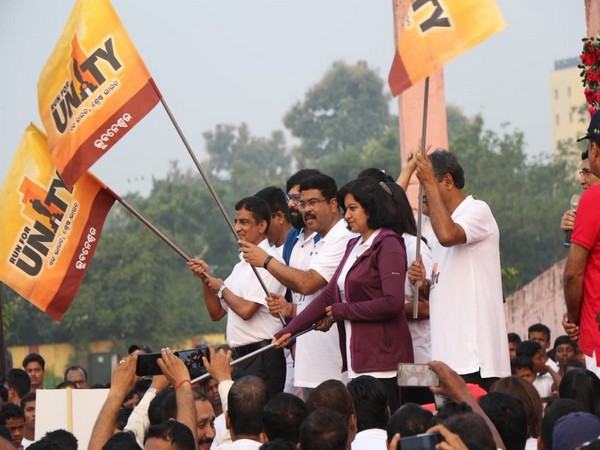 Bhubaneswar (Odisha) [India], Oct 31 (ANI): Union Minister Dharmendra Pradhan on Thursday flagged off and participated in 'Run for Unity' event, on the occasion of 144th birth anniversary of Sardar Vallabhbhai Patel in Bhubaneswar.
Bhubaneswar BJP MP Aparajita Sarangi, key sports personalities and youngsters from different sections of the society participated in the run which was organised with a slogan of 'Ek Bharat, Shrestha Bharat'.
Pradhan also paid tribute to the first home minister of India, Patel and administered unity oath to mark the occasion.
Addressing the event, Pradhan outlined the contribution of Prime Minister Narendra Modi to integrate Jammu and Kashmir in India and fulfil the dream of Patel.
"Under the leadership of Prime Minister Narendra Modi, long demand of revoking Article 370 has been fulfilled to realise the dream of one India. Sardar Patel was a great freedom fighter of India and he played an important role in unifying the country by integrating different princely states", Pradhan said.
'Run for Unity' is being organised in different parts of the country to mark the 144th birth anniversary of Sardar Vallabhbhai Patel.
Earlier, Prime Minister Narendra Modi also paid tribute to Patel at Statue of Unity in Kevadia.
Speaking at the event he said, "'Run for Unity' program is being held in different cities and villages across the country today. I thank every citizen for participating in this program. India is known for 'unity in diversity'; it is our pride and our identity." (ANI)

BJP demands Rahul Gandhi should apologise to PM Modi for...

Chandrashekhar Azad sent to jail without any evidence,...

India challenging mindset of people who thought nothing...

Tibet can play an important role in promoting India-China...

By Sahil PandeyLhasa [Tibet], Aug 10 (ANI): Highlighting the role of Tibet in Indo-China...