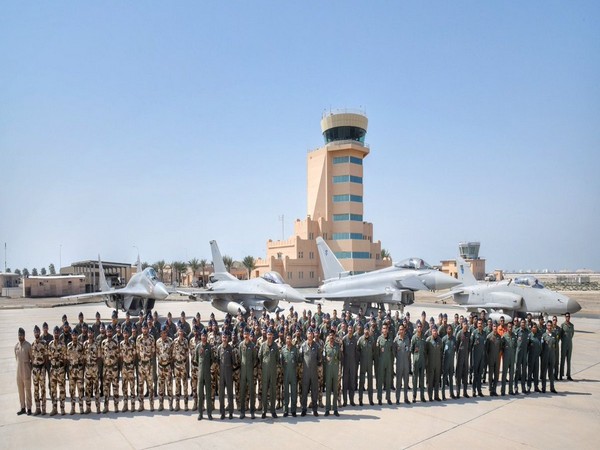 Muscat [Oman], Oct 26 (ANI): The joint exercise between the Indian Air Force (IAF) and the Royal Air Force of Oman (RAFO), "Ex Eastern Bridge-V" has culminated, IAF said on Saturday.
"EasternBridge19 culminated & team IAF is heading Home. The objectives for exercise were to foster closer relationship between Indian-Oman forces & undertake mutual exchange of best practices. Thank you #RAFO for all the support & great hospitality. Happy Landings!!!," IAF said in a tweet.
India had fielded its MiG-29s alongside Omani Eurofighter Typhoons, F-16s and Hawk aircraft for the air exercise at the RAFO base in Masirah.
This was the maiden participation by the IAF's MiG-29 UPG aircraft in an international exercise. The aircraft is a modern multi-role fighter jet, with air-to-air and air-to-ground capability, coupled with air-to-air refuelling.
The last bilateral exercise was held between the countries in 2017 at Jamnagar in Gujarat.
Earlier, IAF chief RKS Bhadauria visited the RAFO base in Masirah on Thursday.
During his visit to Oman, the Air Chief also called on and met Sultan Bin Mohammed Al Nu'amani, Minister of Royal Affairs, and Sayyid Badar Bin Saud Al-Busaidi, Minister Responsible for Defence Affairs.
According to an official release, the IAF chief had a very productive meeting with the Commander RAFO. They discussed the ongoing Ex Eastern Bridge-V exercise and all other areas of mutual cooperation between the two air forces. (ANI)

Dozens of high-value IS detainees left behind by US Forces...