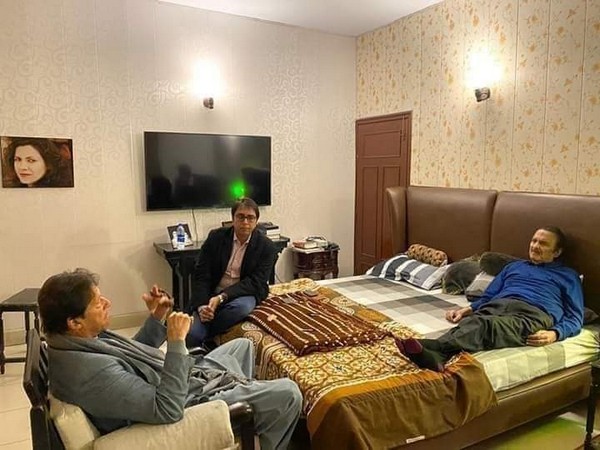 Karachi [Pakistan], Feb 15 (ANI): Naeem-ul-Haq, the Special Assistant to Pakistan Prime Minister Imran Khan, passed away in Karachi on Saturday after losing a long battle with cancer.
Seventy-year-old Haq, breathed his last at the Agha Khan Hospital in Karachi today, according to Dunya News.
The senior PTI official was rushed to the hospital earlier today as his health deteriorated. He was kept in an intensive care unit (ICU) but could not survive.
PM Imran Khan reacted to news of his friend and colleague's death, saying that it had left him "devastated".
"Am devastated by one of my oldest friend Haq's passing away. He was one of the 10 founding members of PTI and by far the most loyal. In 23 yrs of PTI's trials and tribulations, he stood by me. He was always there for support whenever we were at our lowest ebb," PM Khan tweeted.
"In the last two years, I saw him fight cancer with courage and optimism. Till the very end, he was involved in Party affairs and attended cabinet meetings as long as he was able to. His passing away has left an irreplaceable void," the prime minister wrote.
Other senior leaders of the party, including Fawad Chaudhry and Governor Sindh Imran Ismail also paid tribute to Haq.
A banker and businessman by trade and one of the co-founders of Pakistan Tehreek-i-Insaf (PTI), Haque was one of the senior-most members of the party.
During his professional stint in London in the early 1980s, he became close friends with Imran Khan, who used to play county cricket at that time. Imran would frequently visit Haq and his wife, Nazli Jamil ("Nazo").
He worked extremely hard and directly with Imran Khan in organising the party at the grassroots working across the board with workers and part office bearers.
In January 2018 eight months before the general elections, the leader was diagnosed with blood cancer.
Shortly after the party's victory the same year, Haq was appointed a Special Assistant on Political Affairs to the Prime Minister and was involved in a number of initiatives ranging from housing scheme, party operations, SDGs and appointments to name a few. (ANI)

Violence against any community is 'deplorable': Foreign...

Looking forward to meeting you: Modi replies to Trump as...