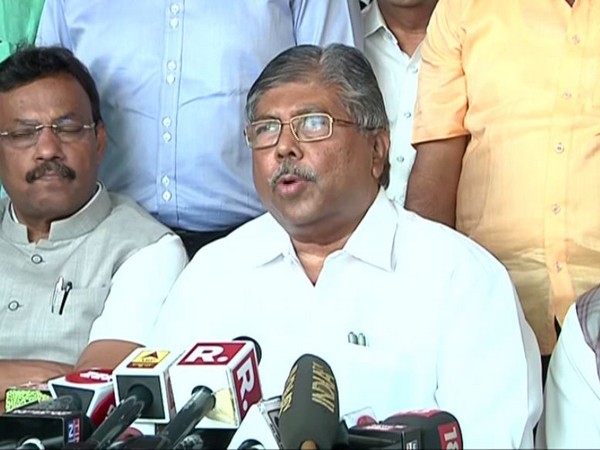 Mumbai (Maharashtra) [India], Dec 2 (ANI): Maharashtra BJP chief Chandrakant Patil on Monday rejected rumours that Pankaja Munde is planning to part ways with the party.
"There are rumours circulating in media and social media claiming that Pankaja Munde, the daughter of late Gopinath Munde, is planning to leave BJP or do something else. Both she and her father had worked very hard for the people and the party," Patil said at a press conference here.
"When a big leader faces defeat there is bound to be some dejection, but it does not mean that they are planning to part ways with their party," he added.
Speaking about Pankaja Munde calling her supporters for a rally in Beed on December 12, Patil said, "It is the late Gopinathji's birth anniversary on December 12 and a big program is organized in his honour in which all the BJP leaders used to participate, even Amit Shahji had attended it once."
The former minister and BJP leader Pankaja Munde had removed the party's name from her Twitter bio.
Now her bio on the micro-blogging site reads, "RT's r not endorsements."
Munde on Sunday urged her supporters to come for a rally to be held in Beed on December 12, the birth anniversary of her late father and former union minister Gopinath Munde.
Through an emotional Facebook post, Pankaja said that after her defeat in the recently held Maharashtra Assembly polls, she had received several calls and messages from her supporters to meet, but could not do so because of the situation in the state.
She also said that in view of changed political scenario, the future course of action needs to be decided. (ANI)

Classes to resume in Jammu varsity from Wednesday

We are very close to restoring normalcy, says J-K DGP