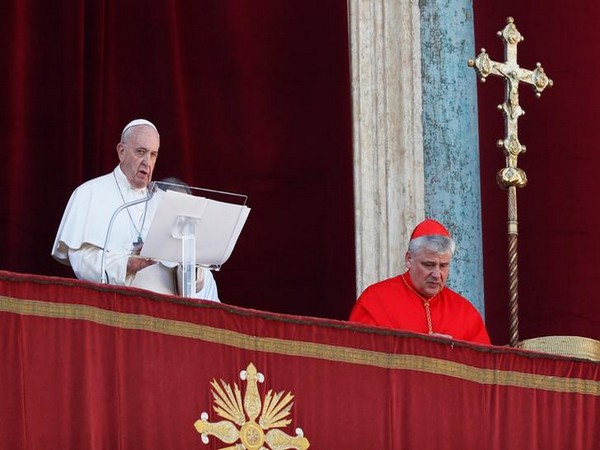 Rome [Italy], Dec 26 (ANI): Pope Francis has, once again, directed the world's attention to the plight of migrants in his annual Christmas speech, appealing to all countries to take responsibility and embrace the refugees who have been displaced from areas plagued by conflict, social and political upheaval, injustice or natural disasters.
Addressing thousands of people gathered in St. Peter's Square on Wednesday, the Pope spoke of the millions of people who have fled their homes for "places where they might have hope for a dignified life," only to find themselves "before walls of indifference," The New York Times reported.
In his speech, the Pope lamented the miseries of several trouble spots, urging the "stony and self-centered hearts" to soften their stand on the millions who have been affected by social and political conflicts in recent years.
Delivering his "Urbi et Orbi" ("To the City and to the World") benediction from a balcony in the facade of St. Peter's Basilica, the Pope called upon Jesus Christ to "bless the efforts of those who spare no effort to promote justice and reconciliation and to overcome the various crises and the many forms of poverty that offend the dignity of each person."
He also called for "concrete solutions for an enduring peace" in Ukraine, and cited all those in Africa "who are persecuted for their religious faith, especially missionaries and members of the faithful who have been kidnapped," as well as "victims of attacks by extremist groups, particularly in Burkina Faso, Mali, Niger and Nigeria."
"It is such suffering that has pushed millions of people to leave their homelands to find better lives," the Pope said.
"It is the injustice that makes them cross deserts and seas that become cemeteries," adding that the "injustice that forces them to ensure unspeakable forms of abuse, the enslavement of every kind and torture in inhumane detention camps," he added.
Earlier on Wednesday, the Pope became one of three religious leaders who appealed directly to the leaders of South Sudan to end the violence in the African country and form a transitional power-sharing government.
Peace talks between the government and rebels have been stalled this week in South Sudan, the world's youngest country, having attained independence from Sudan in July 2011.
Over the past year, the Pope has strengthened the church's stance in fighting the scourge of sexual abuse, convening a meeting of bishops from around the world in February to address the issue.
In May, the Vatican mandated that those suspected of abuse should be reported to their superiors. (ANI)