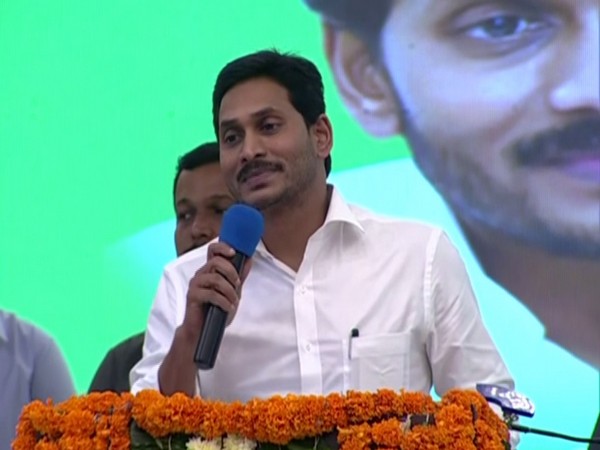 East Godavari (Andhra Pradesh) [India], Nov 21 (ANI): Andhra Pradesh Chief Minister YS Jagan Mohan Reddy on Thursday said that the decision to mandate English Medium in primary schools was taken to prepare the next generation of students to face the highly competitive world.
"The decision for English Medium in primary schools was taken to prepare the next generation to face a highly competitive world. People with vested interests have been carrying out false and negative propaganda even though our government has been giving top priority to public welfare," Reddy said addressing a public gathering here.
The Chief Minister said that the hypocrisy has reached a peak as they opted English Medium education for their kin and are now talking as protagonists of Telugu.
"My dream is only to see that the future generations have a better system of education to face the global job market and the marginalised sections of the society will be vying with everyone on a level playing field," Reddy said.
"When these vested interests come, ask them as to why their kin should study in English medium and why children of fishermen or other weaker sections should not study in the same medium. Our children are not meant for doing menial jobs," he added.
Reddy said that he sees a future for the students where they compete and match stride by stride with others in attire, accent and employment opportunities.
Earlier, Reddy had also targetted Vice President M Venkaiah Naidu and former chief minister Chandrababu Naidu over the same.
The state government had recently issued a government order giving permission to the Commissioner of School Education to convert all government, Mandal Parishad Primary (MPP), and Zilla Parishad schools into English medium. (ANI)

National clean air programme should have measures to penalise non-implementers:...

Kamal Nath government most corrupt in history of MP, says...