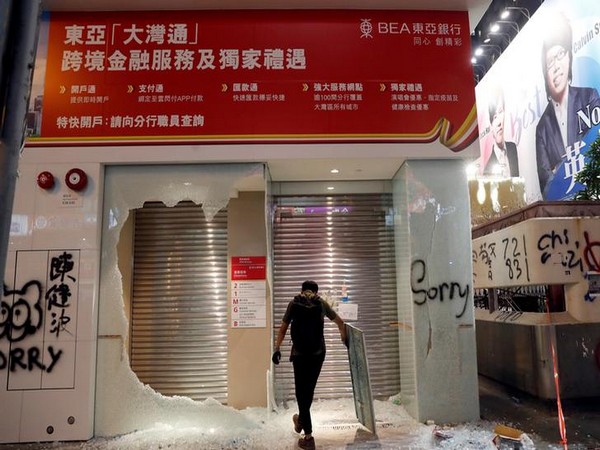 Hong Kong, Oct 31 (ANI): Due to months of violent demonstrations, Hong Kong, the financial capital of Asia, has slipped into recession as its economy shrank 3.2 per cent in the third quarter.
According to official data released on Thursday, HK plunged into recession after months of protests lead to scores of shops to close, paralysed public transportation and scared off tourists from the Chinese administered territory, CNN reported.
It is the first recession in Hong Kong in a decade that could possibly extend into the new year.
Earlier in the day, ahead of the preliminary growth figures, Chief Executive of HK, Carrie Lam, said at a business event that "there is no room for optimism".
Being a major economic hub, Hong Kong was already affected by the ongoing trade tussle between US-China, the mass protest added fuel to the fire.
"Much of the pressure is now coming from political unrest. The trade war itself would cause Hong Kong's GDP growth to slow but not a contraction, while the political unrest could," said Tommy Wu, a Hong Kong-based economist with Oxford Economics.
The protests were ignited by a now-withdrawn plan to allow extraditions to mainland China.
Even though the controversial extradition bill has been shelved, protests have continued and taken on a more pro-democracy outlook, with demands which include investigations into alleged police brutality. (ANI)

MP: 3 dead, 10 injured due to lightning strike in Sendhwa

West Texas gunman was fired from job hours before massacre:...

Kathmandu [Nepal], Dec 3 (ANI): India defeated Pakistan in the final of the South...

NCPCR initiates creation of cells in J-K, Ladakh to monitor...