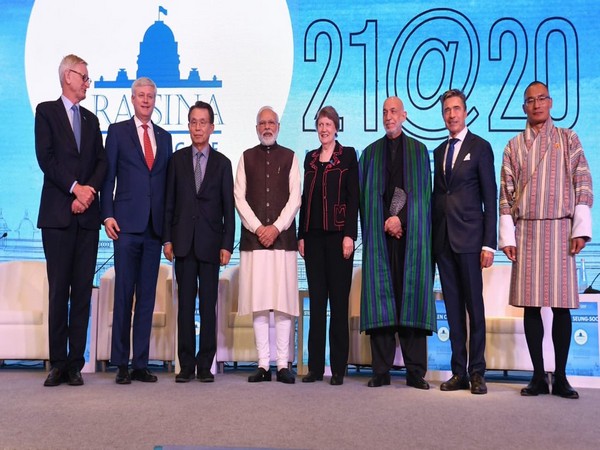 New Delhi [India], Jan 14 (ANI): World leaders participating in India's flagship global conference Raisina Dialogue on Tuesday hailed Prime Minister Narendra Modi's leadership and vision with respect to a range of global issues.
Speaking at the inaugural session of the Raisina Dialogue 2020, former Danish prime minister Anders Fogh Rasmussen said that he would like to see India as a "strong component of the global alliance of democracies" and appreciate Prime Minister Modi's leadership in that respect.
"I would like to see India as a strong component of the global alliance of democracies. I appreciate very much the leadership of Prime Minister Modi in that respect. I hope we could engage India much more internationally in the coming years," Rasmussen said.
Former Canadian prime minister Stephen Harper, whose address centered around challenges faced by "liberal democracies" in coping with political protests in their own countries, hailed Prime Minister Modi, under whose leadership India has become "self-defined".
Harper said that India would not become a "bastion of western liberals" and under the current government, its identity is "coming back in a big way".
"I think the reality of the increasingly multi-polar world will be that there is not a simple answer to that. But a big part of the answer in the future will be a role played by India. If I can pay tribute to Prime Minister Narendra Modi here I think it will be the kind of India that Prime Minister Modi's vision is creating," Harper said.
"I am not just talking about the energetic domestic reforms, but very much a country that is self-defined and aspires to be a global cooperative partner, but at the same time will be very much Indian. India is not going to be a bastion of western liberalism," he added.
Former South Korean prime minister Han Seung-soo said that amid the difficult times, the role of world leaders, particularly Prime Minister Narendra Modi, would be instrumental in "reversing the current trend".
Former Afghan president Hamid Karzai, whose address centered around the Afghan peace initiatives, thanked Prime Minister Modi for "all the support given to the Afghan people and continuing to hold us very close and dear terms".
The fifth edition of Raisina Dialogue kicked off in New Delhi on Tuesday. The flagship conference, which is jointly organised by the Ministry of External Affairs and the Observer Research Foundation, has been India's contribution to global efforts to discover solutions, identify opportunities and provide stability to a century that has witnessed an eventful two decades.
The three-day conclave will bring together 700 international participants, of which 40 per cent of the speakers will be women, emphasising India's commitment to gender equality. (ANI)

Greta Thunberg to cross Atlantic by catamaran to attend...