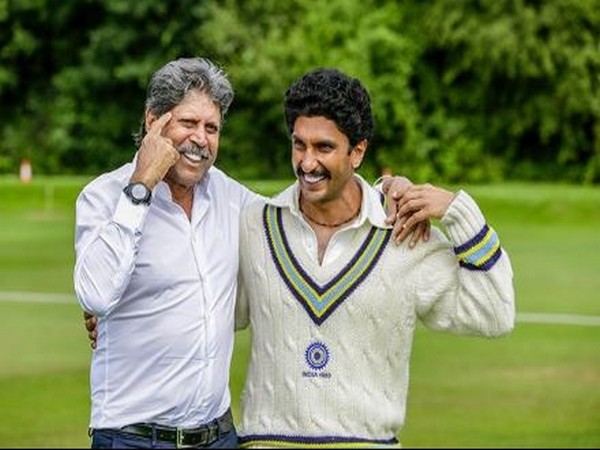 New Delhi [India], Jan 6 (ANI): Ranveer Singh, who will next be seen in the upcoming flick '83' essaying the role of legendary former cricketer Kapil Dev, has wished the legend on his birthday by sharing pictures with the all-rounder on social media.
The 34-year-old actor hopped on to Instagram as he shared several pictures with the former captain of the Indian Cricket Team. The caption to the post reads: "Happy Birthday, Legend! Thank you for showing us the way You made us proud."

In the first picture shared by the 'Padmaavat' actor, Ranveer and Kapil are shown sharing happy moments on the sets of '83'. While Ranveer is seen dressed as his character, sporting a jersey that reads 'India 1983,' Kapil is shown dressed in casuals and is seen resting his hand on Ranveer's shoulder.
In the other picture, Kapil can be seen playing cricket on the field as Ranveer looked at him. Another picture shared by the star also shows director Kabir Khan.
Earlier, the star shared a picture of himself recreating the signature 'Natraj Shot' which is Kapil Dev's iconic shot.
The movie -- '83' -- also stars Deepika in the lead role opposite Ranveer Singh. The film also features R Badree, Hardy Sandhu, Chirag Patil, Saqib Saleem, Pankaj Tripathi, Tahir Bhasin, Ammy Virk, and Saahil Khattar as the Men in Blue. Helmed by Kabir Khan, the movie is slated to release on April 10 next year. (ANI)

NDFB-S terrorist killed in encounter with security forces in Assam

Irrfan Khan back in Mumbai after 'successful surgery' in...