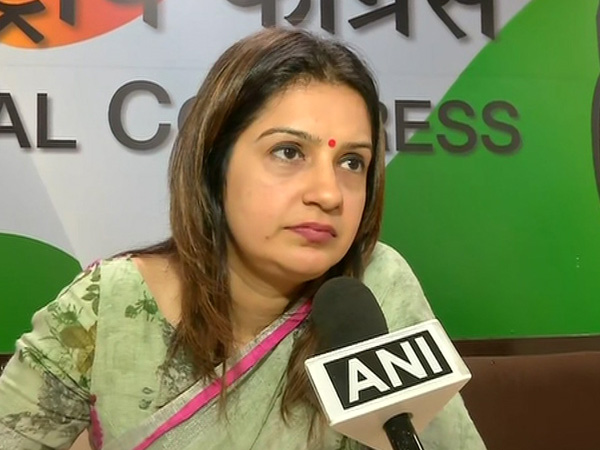 Mumbai (Maharashtra) [India], Nov 8 (ANI): Amid political turmoil in the state, Shiv Sena leader Priyanka Chaturvedi on Friday refuted former Maharashtra Chief Minister Devendra Fadnavis' statement that her party had launched a personal attack on Prime Minister Narendra Modi and Home Minister Amit Shah.
Taking to Twitter, Chaturvedi said that the party might have attacked the BJP on its policy decision over the government formation in Maharashtra but had never made any personal attacks.
"Not a word was spoken against Narendra Modi ji and Amit Shah ji, sad that former CM of Maharashtra Devendra Fadnavis dragged them to speak disparagingly of an alliance partner of past 3 decades. Policy decisions? Yes, but personal attacks? No.," she tweeted.
Earlier in the day, Fadnavis had said that the kind of statements made by Sena against the BJP's top leadership including Modi ji and Amit Shah were intolerable.
"Balasaheb Thackeray is respected by all of us, in fact we have never said anything even against Uddhav ji Thackeray, but in past five years and especially last 10 days the kind of statements which were made against our top leadership including Modi ji, are not tolerable," he said in a press conference here.
BJP and Shiv Sena have been partners in the ruling alliance in Maharashtra and they also fought the Assembly polls together.
The formation of a new government in Maharashtra has been delayed due to differences between the BJP and Shiv Sena over government formation. The results of Assembly polls were declared on October 24.

Shiv Sena has insisted that the two parties had a '50-50' power-sharing agreement before the elections. However, Fadnavis has clarified his party's stand that Shiv Sena was not promised the chief ministerial post for two-and-a-half years when the alliance was sealed. (ANI)

Special prayers offered at Ahmedabad mosque ahead of Ayodhya verdict

Fire breaks out at market in WB's Siliguri

Merck to establish its Sustainability Centre at District...

People want to get rid of BJP in Jharkhand: Congress' Pranav...

New Delhi [India], Dec 23 (ANI): As the initial trends emerge from the counting...