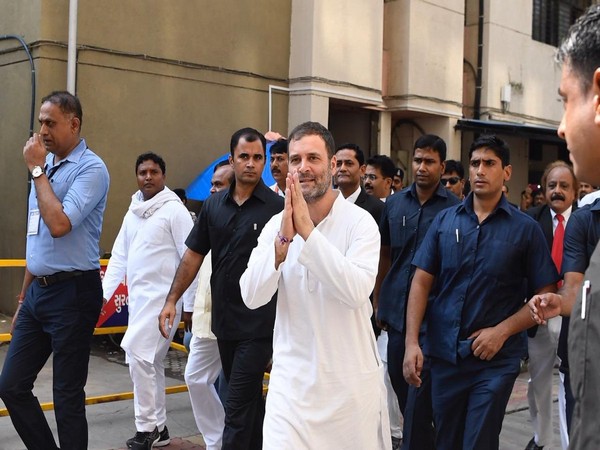 Surat (Gujarat) [India], Oct 10 (ANI): Congress leader Rahul Gandhi on Thursday pleaded not guilty in a defamation case against him and stated that his political opponents are 'desperate' to silence him.
Gandhi also thanked his party workers and supporters for expressing solidarity with him during his appearance at a Surat magisterial court.
"I am in Surat today to appear in a defamation case filed against me by my political opponents, desperate to silence me. I am grateful for the love and support of the Congress workers who have gathered here to express their solidarity with me," Gandhi tweeted.
The defamation case was filed against Gandhi over his "why all thieves share the Modi surname" remark.
After today's hearing, the court has fixed the matter for hearing on December 10, 2019.
The Gandhi scion had made the remarks during campaigning for Lok Sabha elections earlier this year. His party colleague Shaktisinh Gohil defended Gandhi and said that the party in power should tolerate criticism by the opposition.
"In a democracy, the party in power should tolerate criticism by the opposition. Rahul ji had said Lalit Modi and Nirav Modi are thieves and Narendra Modi is a failure. BJP connected his statement to the Modi community and insulted them," said Shaktisinh Gohil, a Congress leader.
Senior party leader Ahmed Patel also backed Gandhi and said, "Let the law takes its own course." (ANI)

4 crore jobs to be created in healthcare industry by 2020: Rxcruit Advisors

Soon, dream of united India will be real: Ramdev on scrapping...

Roads in MP are like Vijayvargiya cheeks, will make them...

US approves sale of C-17 follow-on support for India

Washington [USA], July 27 (ANI): The US State Department on Friday decided to approve...

Xiaomi Mi Watch: Meet the Apple Watch competitor at half...

AI to determine whether immunotherapy is working

Retail inflation rises to 3.99 pc in September due to costlier...

Centre should assure people not to worry: Omar Abdullah...

This MP family members have 12 fingers in hand and feet