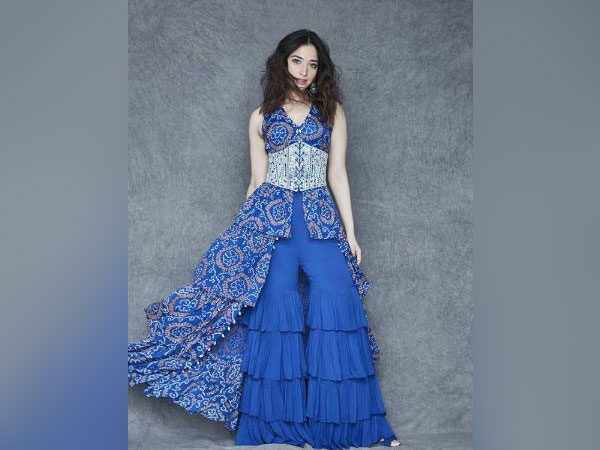 To accessorise her look she wore black metal dangler earrings which had green and red stone embedded in it along with black metal bangles and kadas.
Her makeup looked fresh and natural with just a tint of pink on her lips. Hiral Bhatia opted to curl her hair in bouncy waves complimenting her overall couture that she wore to attend an event for her forthcoming film 'Bole Chudiyan' which will go on floors in June.
The actor who first proved her mettle in south Indian films will be essaying the female lead in the Nawazuddin Siddiqui starrer 'Bole Chudiyan'.
The year 2019 has certainly opened on a favorable note for the 'Baahubali' actor as both her releases F2: Fun & Frustration and Kanne Kalaimaane garnered fantastic reception.
After enthralling the viewers with the sequel version of Kollywood's horror-thriller 'Devi', Tamannaah recently made heads turn with 'Khamoshi'.
Besides essaying the lead role in the Telugu remake of Mahi V Raghav's Telugu film 'Anando Brahma', she has a big release lined up in the Tamil remake of 'Queen' and period drama 'Sye Raa Narasimha Reddy'. (ANI)

Mumbai (Maharashtra) [India], Sep 26 (ANI): In a relief for Punjab and Maharashtra...

Iran launched over a dozen ballistic missiles at two military...

Heinz and Ed Sheeran collaborate for a noble cause

Delhi: Fire breaks out in paper godown, no casualties reported...