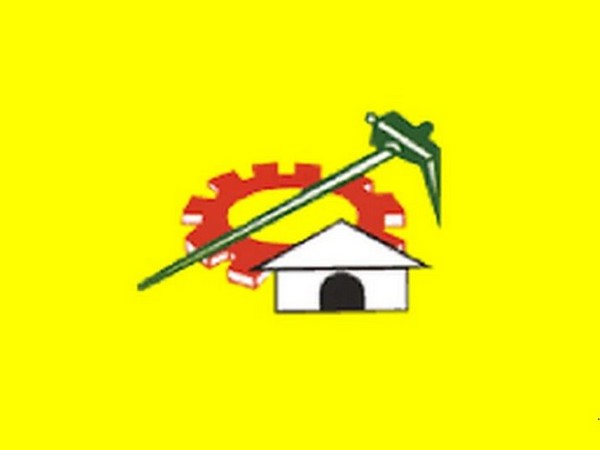 Guntur (Andhra Pradesh) [India], Feb 14 (ANI): Telugu Desam Party (TDP) on Thursday alleged that the YSRCP government in the state is trying to malign the image of N Chandrababu Naidu and his party.
Referring to the recent IT raids and CBDT note, the TDP accused YSRCP of trying to sling mud on their party and their leader Naidu.
In a press release, TDP alleged that Chief Minister Jaganmohan Reddy's government is making false propaganda regarding them only to divert the attention of people from its misrule. The TDP press release further said that the CBDT note did not mention the PS or PA of Naidu directly in its note."
The YSRCP has been trying to malign the image of TDP national president and his former personal secretary P Srinivas was harassed in the name of IT raids for five days, the TDP said in the press note.
The press note said, "Srinivas was already relieved from Chandrababu Naidu's office nine months ago. While the IT officials said that Rs 2000 crore irregularities were noticed in the country, the YSR mafia has started false campaign that the amount was found at Srinivas and started blaming TDP."
"In reality, the Jaganmohan Reddy government awarded the reverse tendering contract of Polavaram project to a company, which was raided by IT officials. The central government also objected to changing of contractors as the project works will be delayed and the same information was revealed in parliament. However, people are questioning how the Jagan govt awarded Polavaram and Veligonda reverse tendering projects to a company facing IT raids," the press note said.
The press note further said that it may be noted that the CBI filed an affidavit asking the court not to give exemption from the appearance of Reddy to CBI court as it will lead to influence the witnesses. "Reddy tarnished the image of Andhra Pradesh through his shell companies and money laundering at international level," the press note said.
"A case was filed against Jaganmohan Reddy companies in international court of justice, Mauritius. Surprisingly, Jaganmohan Reddy who is accused in the Rs 43000 cr scam and involved in 11 cases resorting to mudslinging on Naidu. While Naidu's family revealing their assets every year, why Jaganmohan Reddy family failed to reveal their assets," the press note added. (ANI)

Tributes paid to martyrs of Pulwama terror attack in Dehradun

BJP workers protest in Kolkata against Mamata Govt over...

Nyon [Switzerland], Nov 15 (ANI): England and France have sealed their place for...

Here's how meditation can help you make fewer mistakes

Seven gets life imprisonment for killing lawyer in Hisar...

Traditions have to be followed; Sabarimala devotees say...

Centre will act as facilitator for import of onion: Ram...