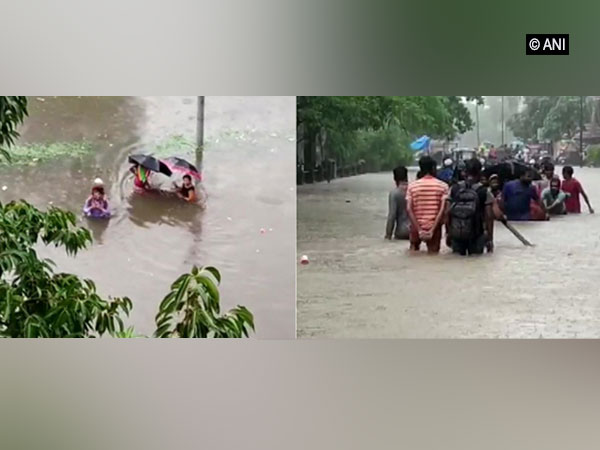 Thane (Maharashtra) [India], July 27 (ANI): Waterlogged streets disrupted normal life as many areas were flooded due heavy rainfall in Thane district on Saturday.
Many people were seen passing through waterlogged streets of Bhiwandi while plenty of vehicles were left defunct in the chest-deep water in Ulhasnagar.
The current flood situation is caused by heavy rainfall in various parts of Maharashtra. The situation may further worsen with Indian Meteorological Department predicting heavy rainfall in isolated places for Thane district in the weekend.
The heavy rainfall has already caused the closure of the Bhushi dam at Lonavala. Earlier during the day, rains lashed Mumbai, leading to traffic snarls and water-logging at several major junctions.
Also on Saturday, over 700 passengers were left stranded for hours as Mahalaxmi Express was held between Vangani and Badlapur stations due to flooding of tracks. All the passengers were later rescued and evacuated safely. (ANI)

What will be, will be: Sanjay Raut on govt formation in...

Farooq Abdullah is not under any arrest or detention: Amit...