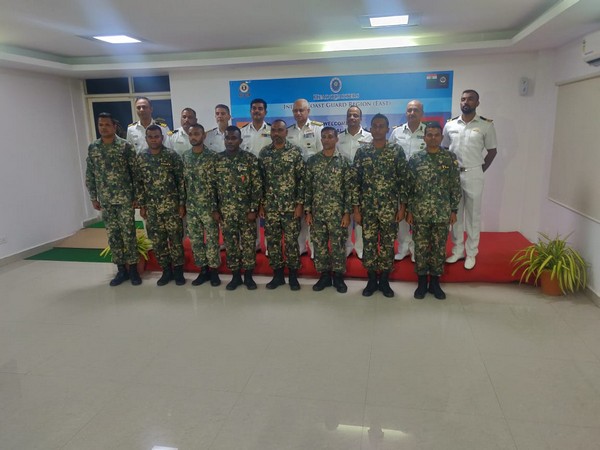 Chennai (Tamil Nadu) [India], Oct 1 (ANI): Coast Guard Regional Headquarters (East) on Tuesday commenced the first-ever training for Maldives National Defence Force (MNDF) officers on the highly versatile indigenously build interceptor boat.
While addressing the media persons, Commander Coast Guard Region (East), Inspector General (IG), S Paramesh said, "They have sent an advanced stream to be trained in India as part of the on-job training so that the personnel can be well acquainted with the capabilities of the interceptor boat."
"The endeavour is to impart as much training as possible to them so that they will stand to benefit when these boats reach the Maldives," he added.
The training programme is being conducted in one group for eight personnel who constitute two officers and six PBOR (Personnel below officer rank).
"The program entails different facets of training for the Maldivian crew with respect to boat handling, communication, gunnery aspects along with the navigation aspects," Paramesh also said.
The training, which will last for 12 days, is an international co-operation initiative wherein the Government of India had agreed to handover one interceptor boat to Maldives MNDF. (ANI)

N Korea, US to hold working-level denuclearisation talks on Oct 5

Maharashtra: Body of woman found in lake in Thane

Rajasthan: 3 held for swindling crores of rupees from doctors