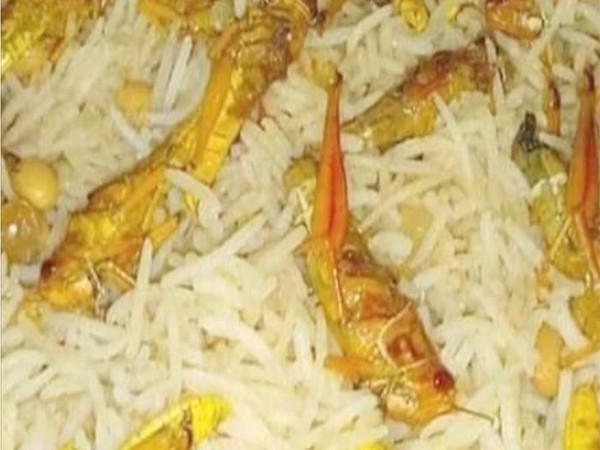 Islamabad [Pakistan], Nov 12 (ANI): Karachiites are witnessing swarms of locusts descending upon their city from Balochistan's coastal areas. Taking a jibe over the situation, Sindh minister of agriculture Ismail Rahu has asked the people to take advantage of the situation calmly by preparing delicious delicacies such as biryani and karahi with the insects.
Known as Tiddi Dal in Pakistan, the insects, in videos shared on social media, were seen filling the skies in different parts of the city, The News International reported.
"They have come all the way here so the residents should eat them," he said in while taking a jibe at the concerned situation.
Another Karachiite, Zoe Khan took to Twitter quoting Sindh Minister Muhammad Ismail, "When tomatoes get too expensive we eat locusts #karachi #Locusts."
Meanwhile, in Thar's Chacharo area, restaurants have been selling biryani and curry dishes made from locusts.
One of the restaurant owners also shared the secret of how to cook these locusts. A locust has to be cleaned first, with its legs and the hind portion being detached from the body, he explained.
Locusts have been long considered a delicacy in the region, with locals calling them a great source of vitamins.
However, Ismail Rahu said that these insects did not damage the crops in Malir. He, instead, assured that fumigation or insect-killing spray would be arranged in these areas.
The minister also said that people should not worry as the grasshoppers do not harm them.
Swarms of locusts first entered into the agricultural area of Malir in Karachi, due to which it was being feared that the crops spread on hundreds of acres of land would be ruined.
Now they have spread in various parts of the city including Malir, Korangi, Bahadurabad, Hasan Square, Nazimabad and other areas where the insects were seen flying in abundance.
The Quaid-e-Azam Trophy match, which was playing between Sindh and the North Zone at the National Stadium here, was also interrupted briefly when a locust swarm showed up. The swarm was large enough that the players had to stop playing and cover their eyes and ears in a bid to avoid contact with the insects. (ANI)

AP CM has no adequate knowledge of our education system: Lanka Dinakaran

He should be very careful with his words: US President...

We will have trade deal with India soon: Donald Trump

Nepal: 7 choppers made emergency landing due to bad weather

Sensex jumps by over 1,200 points after Finance Minister...

Listen up, music lovers: The JBL Flip 5 is nothing short...

Bengaluru (Karnataka) [India] Sept 25 (ANI/NewsVoir): Crank the music up, because...