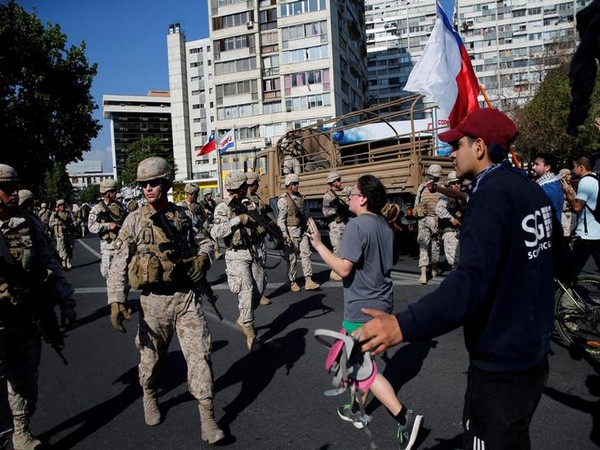 Santiago [Chile], Oct 21 (ANI): Violence continued to mar the Chilean capital despite the government reversing its decision to hike subway fare as authorities here extended the curfew for a second consecutive night on Sunday (local time).
The dusk-to-dawn curfew goes into effect from 7:00 pm (local time), after which people should "be calm and all in their homes," top defence official General Javier Iturriaga was quoted as saying by Al Jazeera.
Iturriaga was appointed the head of national defence by President Sebastian Pinera on Friday as he declared a state of emergency over the unrest.
At least three people have been killed in two days of violence.
The three died in a fire inside a Santiago supermarket that was ransacked as violent clashes between protesters and security forces continued, said the mayor of Santiago said.
Soldiers patrolled the streets in Santiago on Saturday for the first time since the military dictatorship of General Augusto Pinochet ended in 1990, to keep order following violent protests over subway fares.
The military presence was part of a state of emergency declared by Pinera.
The Chilean government has now suspended the rise in fares in the aftermath of the protests.
"I have listened with humility to the voice of my compatriots," Pinera said on Saturday evening.
He also appealed to people taking to the streets, saying "there are good reasons to do so" but calling on them "to demonstrate peacefully" and saying "nobody has the right to act with brutal criminal violence".
Protesters burned several subway stations and damaged dozens of others, and some set fire to an energy company building. Officials reported that 156 police officers and 11 civilians has sustained injuries and more than 300 people have been arrested so far in the Chilean capital. (ANI)

Indians accounts for 93 pc H4 visas issued by US: Jaishankar...