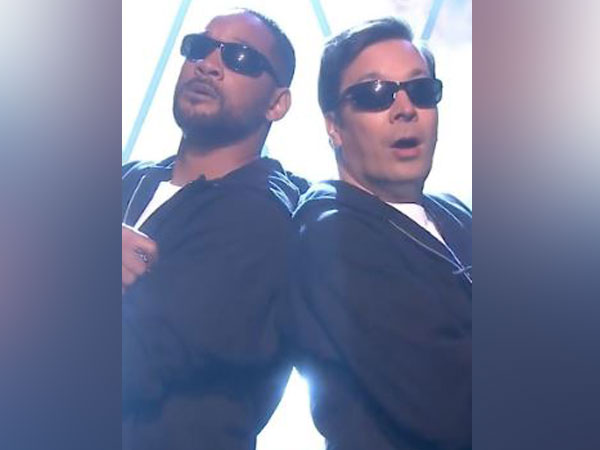 Washington D.C. [USA], Jan 12 (ANI): Hollywood star Will Smith joined Jimmy Fallon in a three-minute-long rap duet on a recent episode of 'The Tonight Show'.
According to USA Today, the song recounted the major milestones of Smith's career, who shot into the scene in the 1980s as an actor and also as a rapper, which pretty much explains the selection of the song's genre.
Donning similar tracksuits, the duo began with rapping about the year 1985 and subsequently about the "The Fresh Prince of BelAir" TV sitcom that brought Smith into the limelight, reported USA Today.
As Smith shouted "From the City of Brotherly Love," Fallon joined in with: "That's Philly."
They even grooved to Alfonso Ribeiro's legendary "Carlton Dance" from the "The Fresh Prince of BelAir" series that ended its run in 1996.
The rap also alluded to Smith's role in movies such as "Independence Day," "Men in Black," "Hitch," "Anchorman 2."
The rap mentioned Smith's wife Jada Pinkett Smith, and his three children, out of which Jayden and Willow are into the showbiz themselves.
The lyrics said: "Started out a Prince, then became the Fresh Papi Cuz Trey is the Ace, Jaden's a force Willow came and told ya 'Whip Your Hair Back and Forth.'"
Smith's much-awaited sequel of the Bad Boys series, "Bad Boys for Life," is set to be launched in US theatres on January 17.
Smith sneaked in a promo for the movie with Fallon mentioning Smith as a "Good Man," to which the actor replied, "And Bad Boy for life". (ANI)

2 dead, 3 injured after clash between two groups regarding flow of drainage water...

New gripping 'Shikara' poster is out